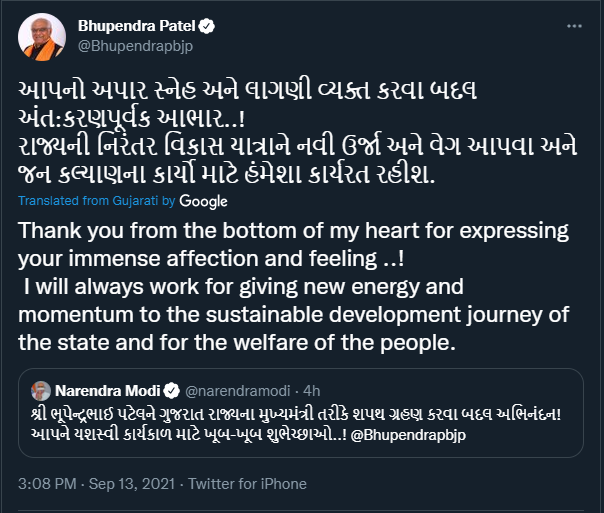 59-year-old Patel is a first-time MLA from the Ghatlodia seat, a post previously held by his political mentor, former Chief Minister and current Uttar Pradesh Governor Anandiben Patel. He won the 2017 Legislative Assembly elections with the highest winning margin in Gujarat’s history of 1,17,000 votes. This translates to just over 72% of the constituency’s total number of votes.

Before entering politics, Patel was a development planner and architect with a diploma in civil engineering from the Government Polytechnic College in Ahmedabad. He entered the game of kursis in the late 1990s when he served as president of the Ahmedabad civic body - between 1999-2000 and 2004-06. He quickly moved on to become the vice-chairman of the influential Ahmedabad Municipal Corporation school board from 2008-10.

In 2010, he ran for a councillor seat from Thaltej ward, which he won. He served till 2015. During this time, he was also made the chairman of the Ahmedabad Urban Development Authority (AUDA). He was also a member of the Memnagar Nagarpalika in 1995-96, 1999-2000 and 2004-06. Memnagar is a small town in the district of Ahmedabad. Also, he served as a chairman of the Standing Committee of the AMC.

Bhupendra Patel has always unabashedly been a close aide of Anandiben Patel, who succeeded Narendra Modi to become the first woman to lead Gujarat as its CM. In all his time in Gujarat’s state political mechanism, Bhupendra Patel had also served under Modi and Rupani.

Many senior political analysts are considering this move to be an attempt to appease the Patidar community, who have in recent years shifted their allegiances from the BJP. Bhupendra Patel is also a member of the Kadva Patel community, which form about 12.4% of the state’s population. Till now, all the other ‘Patel’ Chief Ministers of Gujarat were from the Leuva Patel community.