The longstanding border dispute between Odisha and Andhra Pradesh over the statehood of the Kotia Gram Panchayat, which lies on the border between the two states, has not been resolved even after the intervention of the Supreme Court just two weeks ago.

In February, the Odisha government had filed a case of contempt before the apex court after Andhra Pradesh conducted a rural election in Kotia as a constituency under its Vizianagaram district. According to the Odia interpretation, Kotia is a part of the Koraput district. The election process had begun in direct violation of the Koraput Collector’s orders and ended in CRPF intervention after scuffles broke out between police officers of the two states.

In the hearing of this case, which took place on August 31, the Supreme Court had advised the two states to resolve their issues internally, granting them six weeks to hold the requisite political discussions.

Despite this, the inter-state conflict has continued to fester.

According to an Indian Express ground report, just two weeks ago, a team from Andhra Pradesh had arrived at Kotia’s Phattuseneri village, where they had conducted bhoomipujans for an Anganwadi, an aarogya centre, a farmer's hall and a panchayat office. Responding to this action, the Odisha government has erected barricades and deployed police forces in the disputed region. In retaliation, Andhra Pradesh has taken this matter to the Supreme Court, calling it a gross violation of the apex court’s directive.

This legal battle for territorial control can be traced back to the 1960s. During the formation of Odisha in 1936, it did not survey the 21 villages under Kotia panchayat. Those villages were also left at the time of Andhra Pradesh’s formation in 1955. Since these lapses were discovered in 1963, they have led to a constant dispute between the two states.

To some extent, this dispute seems to have worked in favour of the villagers as Bhubaneshwar and Vishakhapatnam continue to assert administrational dominance by initiating separate sets of welfare schemes. For instance, the Odisha government constructed the gram panchayat office, the village agricultural centre and also implemented MGNREGA., whereas Andhra Pradesh has also built roads, supplied electricity and provided rations to all below-poverty-line families in the area. 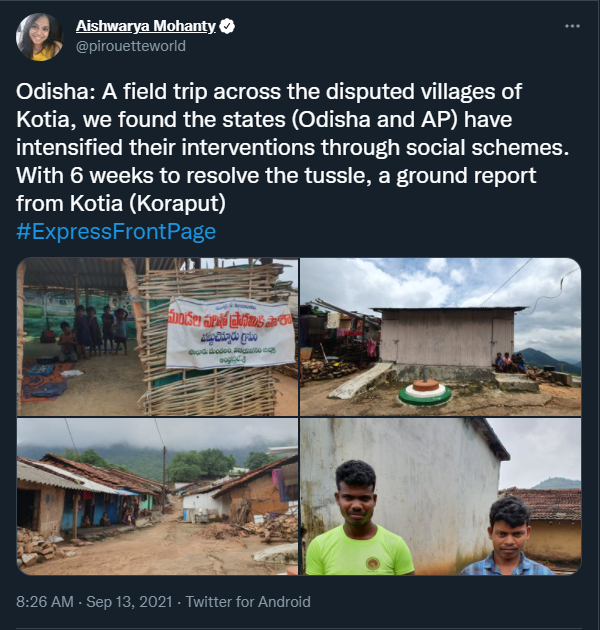