The Jammu and Kashmir government will implement the Forest Rights Act, 2006, which was not applicable in the union territory for the last 14 years, to grant and safeguard the rights of forest dwellers, an official spokesperson briefed the Press Trust of India on September 8 (Wednesday). The bill had been first floated in November last year.

Chief Secretary BVR Subrahmanyam chaired a meeting to review the implementation of the Scheduled Tribes and Other Traditional Forest Dwellers Act and Rules, which became applicable in the union territory post the enactment of the Jammu and Kashmir Reorganisation Act, 2019. 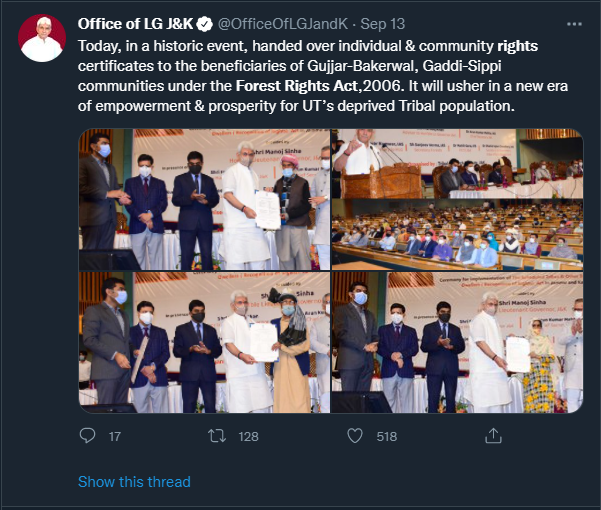 According to a Hindustan Times dispatch, the departments of tribal affairs, forest, ecology and environment started working on its implementation in October last year.

“It may be pointed out that the Forest Rights Act of 2006 provides for granting of rights to forest dwellers across the country,” the spokesperson was quoted by Scroll.in. “However, the rights conferred under this Act shall be heritable but not alienable or transferable.”

The spokesperson said it was decided that the forest-dwelling Scheduled Tribes and other traditional forest dwellers will be provided with the rights over forest land for habitation or self-cultivation, livelihood, ownership, access to collect, use, and dispose of minor forest produce, and entitlement to seasonal resources among others.

For a periodic review of the process and procedures associated with the Forest Rights Act and Rules, the forest department was asked to devise a suitable review mechanism and monitoring formats.

Meanwhile, the Centre is considering making amendments to the act with a 2019 draft of the Forest Amendment Bill sitting on the Parliament’s tables over the past two years, undergoing a plethora of changes.

If passed, these changes would let forest bureaucracy in states and UTs that subscribe to this law to use firearms with AFSPA-like immunity from prosecution and acquire land for undefined 'public purpose’ using the now-defunct Land Acquisition Act of 1894.