The World Health Organisation (WHO) has released new stricter air quality guidelines lowering the recommended levels of pollutants that are considered to be safe for human health, The Indian Express reported. These guidelines were revised 15 years after being published for the first time in 2005. 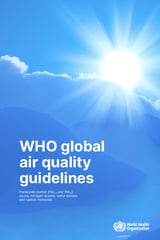 (Click on the image to view the full report)

According to WHO estimates, every year, nearly seven million deaths are associated with diseases related to air pollution. According to a CNBC dispatch, "Air pollution is one of the biggest environmental threats to human health, alongside climate change. Improving air quality can enhance climate change mitigation efforts while reducing emissions that will, in turn, improve air quality."

Pollutant Matters (PM) are small suspended matters in the air that can be hazardous. Some of the common PMs are PM2.5, PM10, ozone, nitrogen dioxide, sulphur dioxide, and carbon monoxide.

According to the US Environmental Protection Agency (EPA), exposure to PM2.5 and PM10 pollution can cause heart and lung diseases, heart attacks, irregular heartbeat, asthma, decreased lung function, and increased respiratory symptoms. Exposure can lead to premature deaths.

India is considered the third most polluted country in the world. These new guidelines mean that almost the entirety of India would be considered a polluted zone for most of the year.

A large number of India’s population is already living in areas where pollution levels are higher than WHO’s 2005 guidelines. Experts suggest that the already pandemic-hit tourism sector will take the hit of this fall.