The farmers also appealed to all Opposition political parties to stand with them. The farmers’ protest has completed nine months on Thursday, marking 300 days since its inception.

The bandh was ceremoniously ‘observed’ around the country from 6 AM to 4 PM. The farm leaders called it a peaceful strike. In a statement to the media, the organisers said that they had received “unprecedented and historic” responses from more than 23 states, and not a single untoward incident was reported from anywhere.

The Economic Times reported that some state governments and opposing political parties had extended their support to the bandh.

This was the third Bharat bandh to be called by the Kisan unions in the 300 days of their protest. Around 10 rounds of talks have taken place between the government and the aggrieved farmers but have failed to break the deadlock.

Bharatiya Kisan Union leader Rakesh Tikait said at a press conference at the start of the day, “This Bharat bandh will be historic. The government of India should repeal the three farm laws. If not, SKM will go to every part of the country, hold meetings and protests against the Central Government, and campaign in poll-bound states. It has been 10 months of this agitation. The Administration must listen with open years that even if we have to agitate for 10 years we are ready.” 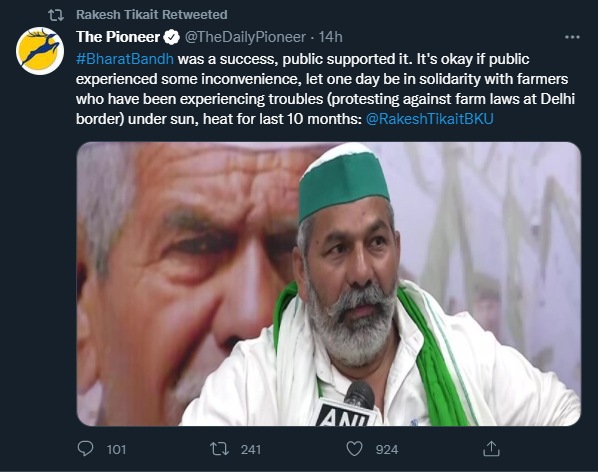 Additionally, rail services and buses were suspended for the day in Punjab, and a complete shutdown was observed. Meanwhile, massive traffic snarls were reported on the Gurugram-Delhi border as vehicles entering the national capital were checked by the Delhi police and the paramilitary jawans. Since the violent turn of the January 26 protests, security forces have been on high alert regarding farmers.

Not all states were as enthusiastic about the strike as Tikait claimed. No disruption was observed in Assam, Bihar, MP, Kerala, Tamil Nadu and West Bengal, and public transport operated as usual.