On October 25, about a month after a court granted his son-in-law bail in a drugs case, Nationalist Congress Party (NCP) leader and Maharashtra minister Nawab Malik has accused NCB Zonal Director Sameer Wankhede of foisting a false case against Aryan Khan and acting as a “pawn” to harass Aryan’s father, Shah Rukh Khan.

Over the past month, Malik shared Wankhede’s personal photographs on social media, including one posted by his sister in Dubai to “prove” that the NCB officer was in the UAE city when Wankhede had vehemently denied being outside India. 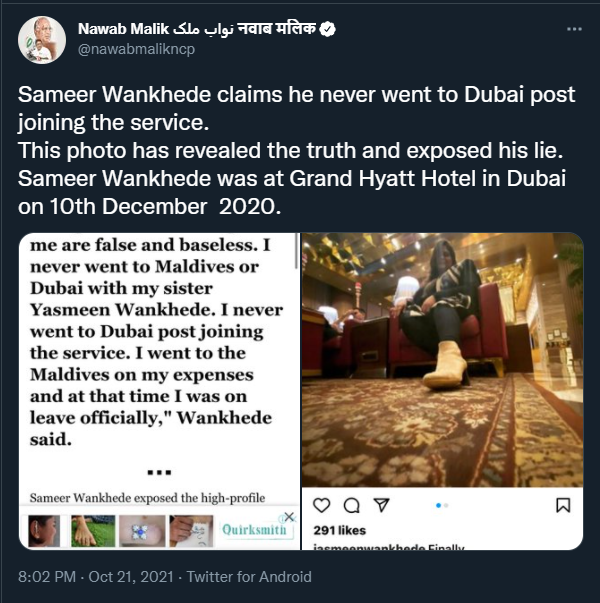 Malik brought out proof showing the NCB’s involvement of “outsiders” in Aryan’s arrest, and that, of the agency’s three “witnesses”, one had links to the BJP, another (KP Gosavi) was wanted in cases of cheating, while all three had ties to Wankhede. As a result, the NCB had to issue a clarification defending itself and the investigation’s integrity.

On Monday, Malik also claimed on Twitter that Wankhede had faked his caste certificate to get through the Union Public Service Commission (UPSC) exam in 2007 under the SC quota. Malik had posted what appeared to be a scanned copy of Wankhede’s birth certificate to substantiate his claims. The document showed that Wankhede's middle name is Dawood. 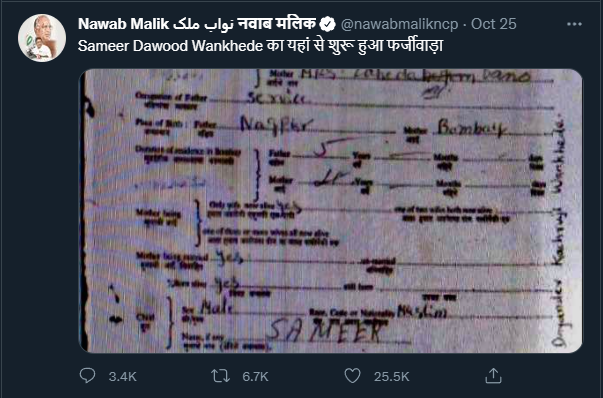 Wankhede, a revenue services officer, released a statement saying that his father, Dnyandev Kachruji Wankhede, retired as senior police inspector of the state Excise department, Pune, in June 2007. His father is Hindu and his late mother Zaheeda was Muslim,

Wankhede claims that Malik’s campaign against him is motivated by personal reasons, mainly the arrest of Sameer Khan. “The NCB had taken action against Nawab Malik’s relative, and hence he has been targeting it,” Wankhede said. In a complaint to the Mumbai Police, he said he was being trailed by unknown men, even during a visit to his mother’s grave. 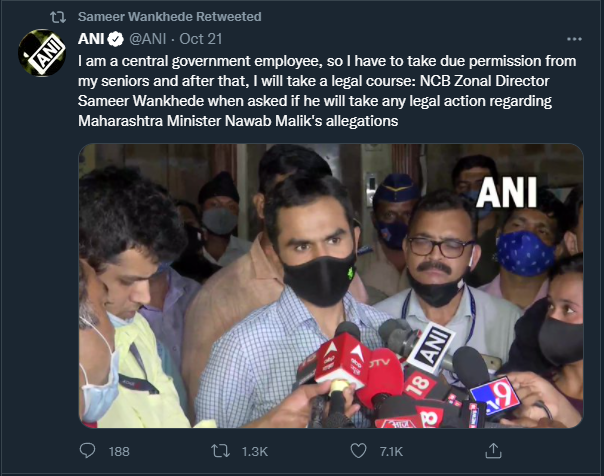 Malik acknowledges his interest in the Aryan Khan case was caused by what his family went through. Sameer Khan, businessman and Malik’s son-in-law, spent nine months in jail after being arrested by the NCB on January 9, alleging the recovery of “commercial quantity” of contraband from one of his associates. However, while granting Sameer Khan bail in September, a Mumbai court observed that no case of illicit drug trafficking or conspiracy was made out against him.

The 61-year-old NCP leader’s campaign against Wankhede has so far served the three-party ruling coalition well, fitting with the narrative of a central agency intent on targeting an Opposition-ruled state. Malik’s revelations, particularly the links with the BJP, have also given the state’s ruling Maha Vikash Aghadi coalition an attacking edge it had lacked so far.