Allegations that Israeli-made Pegasus software was used to snoop on journalists, activists and politicians in India are about the violation of fundamental rights and “could have a chilling effect,” the Supreme Court said while setting up an inquiry panel headed by a retired judge on Wednesday, LiveLaw reported.

“A vague denial from the government is not sufficient,” the bench led by Chief Justice NV Ramana was quoted saying by NDTV, asserting that the government could not give any clarity despite being given “ample opportunity” to do so. There had been no specific denial by the Centre, it said. 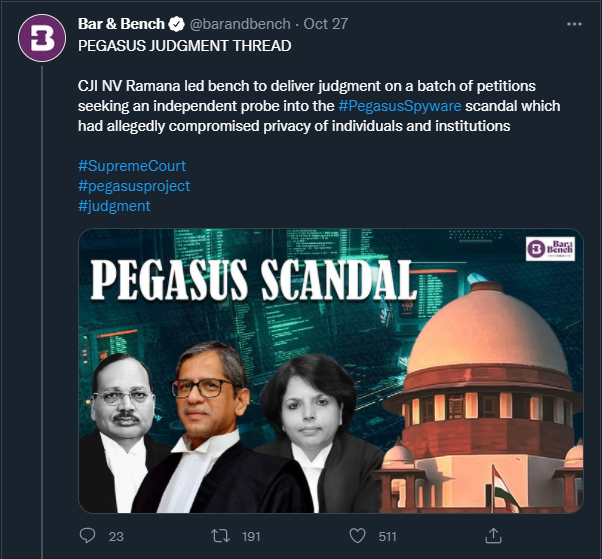 This three-person committee has to “expeditiously probe” the charge and report to the court by the next hearing two months later.

The court declined the government's request to set up an expert panel, saying it would “violate the settled judicial principle against bias.” The order noted that direct victims had filed various petitions in the case. “Justice should not only be done but should be seen to be done” the court observed.

“This court gave ample time to the Centre to disclose all information regarding the Pegasus attack in 2019. However, only a limited affidavit was filed, throwing no light. If the Centre made its stand clear, the burden on us would have been less," said the Chief Justice.

“In today's world, restrictions on privacy is to prevent terrorism activity and can only be imposed when needed to protect national security. But the state cannot get a free pass every time by raising national security concerns,” CJI Ramana said, “National security cannot be the bugbear that the judiciary shies away from, by virtue of its mere mentioning.”