The India Today Group filed a Rs 2 crore copyright infringement suit against Newslaundry, accusing them of “infringing copyrighted material.” Copies of the notice were shared on social media by executives from both sides. 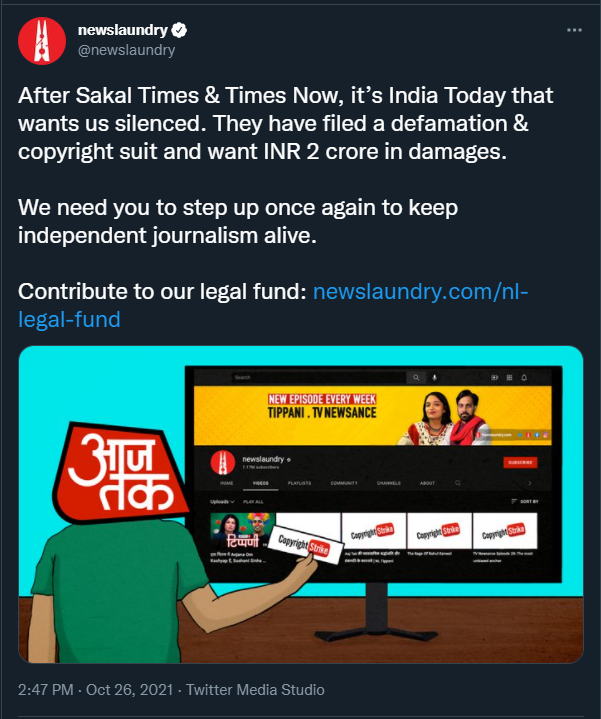 The copyright suit comes nearly a month after Newslaundry claimed that YouTube froze its channel after the India Today Group had reported multiple copyright violations.

The suit filed in the Delhi High Court seeks to have 34 articles published on the Newslaundry website and 65 videos on the portal’s YouTube channel removed. It also seeks similar action against social media content related to these articles and videos posted on Newslaundry’s Facebook and Twitter accounts.

The suit asks the Delhi High Court to restrain Newslaundry, and its journalists, from stealing India Today Group content for its purposes.

Newslaundry had previously been sued for defamation by the Sakal Group and the Times Group earlier this year. Essentially for the same programme as the India Today Group. Newslaundry’s TV Newsance YouTube show, one of their premier programmes, pokes fun at the state of TV news media in India.

Newslaundry’s offices were raided by the Income Tax department, who seized some documents during a so-called “survey operation” on the media house a month and a half back. Last month, the Delhi High Court said that the Income Tax department is bound by its assurance to maintain the confidentiality of the material seized and ensure it is not leaked.

Newslaundry was co-founded in 2012 by Abhinandan Sekhri, Madhu Trehan and Prashant Sareen. Madhu Trehan is the sister of India Today Group’s founder-publisher and former editor, Aroon Purie. Newslaundry had tie-ups with India Today for some time in its initial days.