Why are Young Journalists Opting Out of Journalism?

Karnataka based climate journalist Rishika Pardikar was an angry woman on Wednesday.

Her post gained quick popularity and turned the spotlight on the financial state of freelance journalism in India.

You see, Rishika had written an article for Scroll.in four months ago. She has not been paid yet. Her charges had not been sky high either. At a measly Rs 4 per word, she was owed Rs 4,000 for her 1,000+ worded piece that took days of extensive reportage to work out. 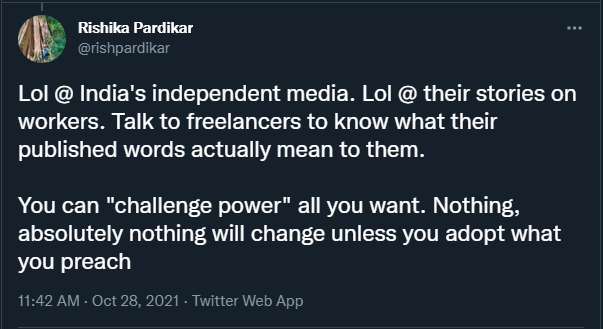 However, when she contacted Scroll’s editors, including Naresh Fernandes, to ask for dues, she was first given a false promise and then ghosted for months.

Now that Scroll has sent out employment notices, Rishika voiced on Twitter, “So you have money to pay present staff + new hire but not freelancers!?”

Rishika is one of hundreds of freelance journalists, columnists and writers in India who miss out on regular payments. Yet, most media houses in the country, even the big ones such as The Times of India, Hindustan Times, The Hindu and smaller independent ones such as The Print, Caravan, Newslaundry and NewsClick, have been known to miss out on timely payments.

Amsterdam-based culture journalist Snigdha Bansal has faced similar issues. Earlier this year, she was ghosted by the editors of four major Indian publications with five figures of unpaid wages between them.

Guwahati-based environmental journalist Aatreyee Dhar has to “haggle” (her words, not mine) with editors who commission stories that require her to travel across states but are unwilling to pay for transport and accommodation.

It doesn’t get better once you get further up the ladder, either.

The former editor of Mint, Anindita Ghosh, gets Rs 18 per word at premium Indian publications. This is the maximum rate offered by any Indian platform and is what traffic-friendly scribes like Tavleen Singh, Raghu Karnad and Rana Ayyub make. 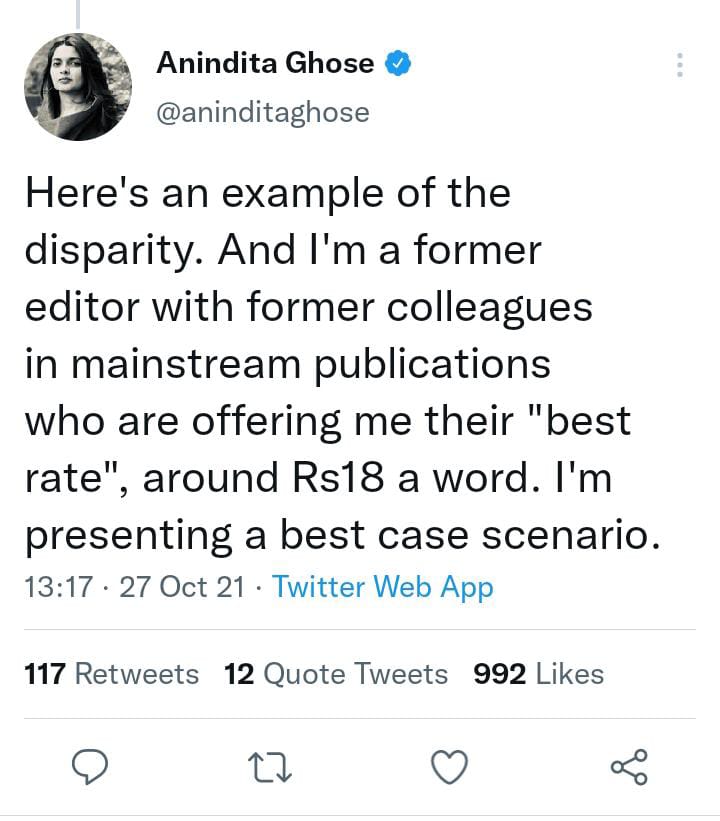 The likes of journalistic influencers with clout such as Anushka Rathod, Saket Gokhale, Suknidh Kaur and Disha Ravi can get offered up to Rs 54,000 per post to promote a particular cause or an event.

“Is it any wonder that there is a mass exodus of talent from Indian newsrooms?” asks Anindita Ghosh.

This is without even considering the inherent sexism in the industry.

There are dozens of instances of public spats between editors and journalists over the gender pay gap. Women tend to be offered less initially. Also, many women have vented about their work being put under a microscope for issues while their male colleagues are more often than not given a free pass.

As Anindita Ghosh puts it: “Journalists potentially write for three reasons: One. They want/need to tell a story. Two. There's a prestige in being published in XYZ place. Three. They're going to get paid for it, make a living doing something they want to do. Sadly, two and three are not applicable for Indian media anymore.”

Freshers have it the worst getting paid a measly Rs 2,500 for even breaking an exclusive story.

How is the worth of three days’ editorial labour less than a social media post?

This is grossly unjust. And until editorial rooms correct their courses, the best will continue to move out.