Kohli Comes Out in Support of Shami, Faces Abuse for Being 'Woke'

31-year-old Shami, the only Muslim player on the playing eleven, was caught in the storm after the 10-wicket defeat in Dubai, even though Kohli acknowledged that his side had been outplayed as a team.

“Attacking someone over their religion is the most, I would say, pathetic thing that a human being can do,” skipper Kohli said in an online interaction from Dubai.

“Everyone has the right to voice their opinion and what they feel about a certain situation, but I personally have never ever even thought of discriminating (against) anyone over their religion,” Kohli said during a press conference ahead of India’s clash with New Zealand on Sunday.

“Mohammad Shami has won India n number of matches in the last few years… If people can overlook that...I honestly don’t even want to waste one minute of my life to give any attention to those people, and neither does Shami and neither does anyone else in the team,” the Indian skipper said. 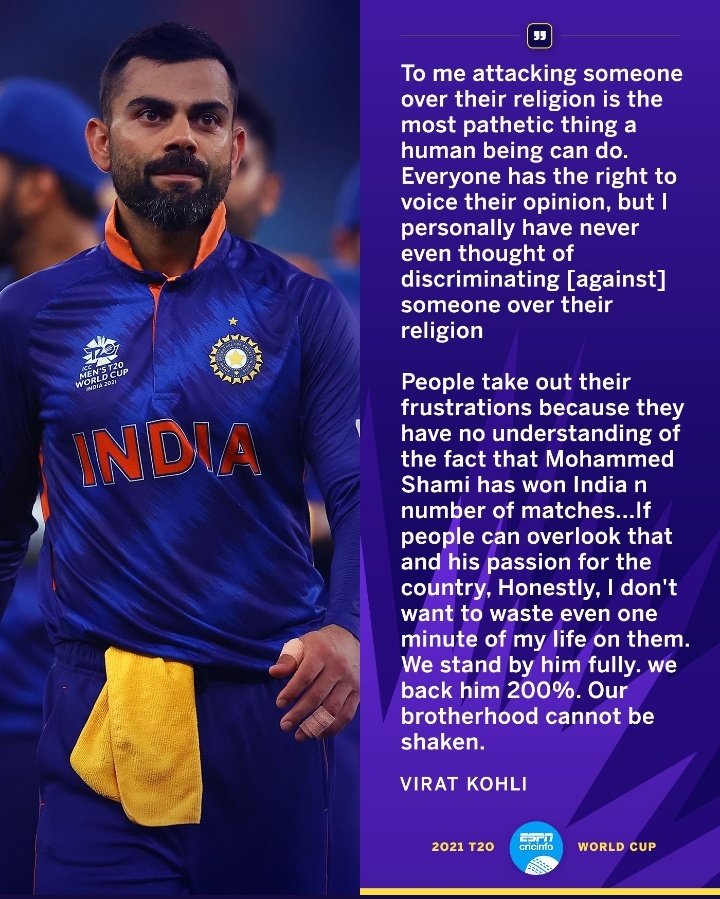 Kohli said the bond between team members is so strong that this kind of chatter doesn’t bother them.

Talking about his take on social media abuse, Kohli termed it as the “lowest level of operative human potential”, saying, “They hide behind identities to go after people on social media, making fun of people, and that has become a social entertainment in today’s world which is so unfortunate and sad to see.”

While former cricketers such as Virender Sehwag, VVS Laxman and Sachin Tendulkar had sought to defend Shami by excusing a “rare off day”, they chose to elude the Islamophobic nature of the abuse Shami faced.

The reaction has launched Kohli into the political arena. On social media, he has been the subject of a storm of abuse. A certain section of the fans is calling the Indian captain a “woke liberal” and blame the team’s poor performance on “his politics.” An anonymous account even threatened rape to Kohli and his partner actor Anushka Sharma’s toddler.

Even politicians have entered the fray.

However, reports greatly exaggerated that right-wing politicians accused Shami of “throwing the match away” against Pakistan. No public figure, not even minor politicians known to say ridiculous things, had made such remarks. Not even a Bajrang Dal activist, as per the Mint’s fact check team.