Journalist and co-founder of the fact-checking website Alt News, Mohammed Zubair, was arrested by the Special Cell of Delhi Police on Monday evening for allegedly “hurting religious sentiments and inciting riots or enmity”. Zubair has been charged under IPC sections 153-A (promoting enmity between different groups) and 295-A (malicious acts intended to outrage religious feelings).

The bail application for Zubair was declined by the court on the grounds of “not finding merits.” He is currently on one-day police remand and will be presented before the duty magistrate seeking further police custody.

Zubair was arrested based on the complaint made by a Twitter user under the username ‘@balajikijaiin’ against a tweet posted by Zubair in March 2018, alleging that the co-founder had tweeted a ‘questionable’ image to “deliberately insult the god of a particular religion”, police said.

Interestingly, the alleged complainant's Twitter account was created in October 2021 and had only one follower till Monday evening, the time of Zubair’s arrest. Moreover, the identity of the complainant remains anonymous.

According to Delhi Police Officials, “Present case registered on basis of a post on Twitter by handle Hanuman Bhakt @balajikijaiin where he showed his anger against another Twitter handle in name of Mohammed Zubair regarding the post “BEFORE 2014: Honeymoon Hotel. After 2014: Hanuman Hotel.”

On June 19, 2022, @balajikijaiin tagged the Delhi Police and tweeted, “Linking our God Hanuman Ji with honeymoon is a direct insult of Hindus because he is brahmachari. Kindly take action against this guy.” 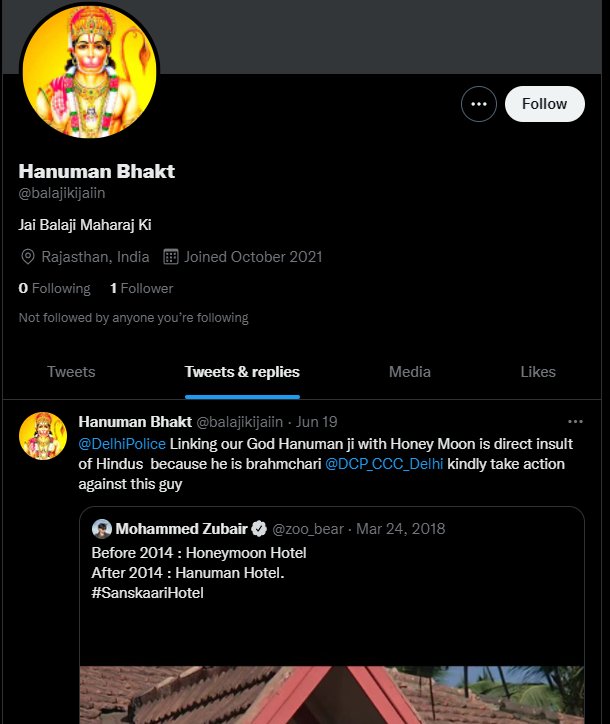 According to Delhi Police officials, Zubair was “evasive” during the questioning and was non-cooperative in the investigation.

Pratik Sinha, Zubair’s colleague and co-founder of Alt News, raised his concerns over Zubair’s arrest. “Zubair was called today by special cell, Delhi for investigation in a 2020 case for which he already had protection against arrest from High Court. However, today at around 6.45 pm we were told he has been arrested in some other FIR for which no notice was given which is mandatory under law for the Sections under which he has been arrested. No FIR copy is being given to us despite repeated requests,” he Tweeted.

Many opposition leaders and celebrities criticised the journalist’s arrest. Congress leader Rahul Gandhi tweeted, “Every person exposing BJP's hate, bigotry, and lies is a threat to them. Arresting one voice of truth will only give rise to a thousand more.”

Another Congress MP, Shashi Tharoor, demanding Zubair’s immediate release, tweeted, “They debunk falsehoods whoever perpetrates them. To arrest @zoo_bear (Mohammad Zubair) is an assault on truth. He should be released immediately.”

Meanwhile, DIGIPUB News India Foundation, condemning the arrest and demanding the Delhi Police withdraw the case against Zubair, issued a statement saying, “In a democracy, where every individual possesses the right to exercise the freedom of speech and expression, it is unjustifiable that such stringent laws are being used as tools against journalists, who have been accorded the role of playing the watchdog against the misuse of the institutions of the state.”

It further said the imposition of stringent laws against journalists “must be stopped.”