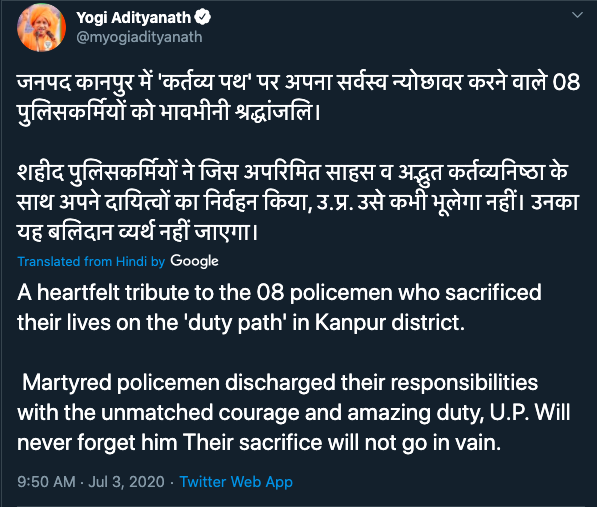 At least eight personnel of the Uttar Pradesh police, including a deputy superintendent and three sub-inspectors, were killed during the attempted arrest of gangster Vikas Dubey, in Uttar Pradesh’s Kanpur district, in the wee hours of Friday morning.

The police raid party went out to look for Dubey, based on a First Information Report (FIR) of attempted murder filed by a local villager, Rahul Tiwari. Tiwari had also requested the police to conduct their search in and around the Bikru village, which falls under the jurisdiction of Kanpur Dehat's Shivli Police Station.

Officials said that as the police team was about to reach the history sheeter’s safehouse, the people inside opened fire on them from the rooftop. Deputy SP Devendra Mishra, three sub-inspectors, Mahesh Yadav, who was the station head officer (SHO) of Shivrajpur, Anup Kumar, Babulal and four constables, Sultan Singh, Rahul, Jitendra and Babloo died in the gunfight.

Uttar Pradesh Director General of Police (DGP) HC Awasthi said Dubey might have got an inkling of the impending raid and added that the criminal and his henchmen put up massive roadblocks to prevent the police personnel from proceeding towards their hideout. As the police team was caught unaware, the criminals fired at them from a building rooftop leading to the deaths.

Vikas Dubey, now in his 40’s, was the prime suspect in Bharatiya Janata Party (BJP) leader and minister of state Santosh Shukla’s murder inside the Shivli police station in 2001. Two policemen were also killed in that attack. He was also accused of shooting down Siddheshwar Pandey, the principal and assistant manager of Tarachand Inter College in 2000. He has around 60 charges against him and allegedly maintains a private army in Bikru village.