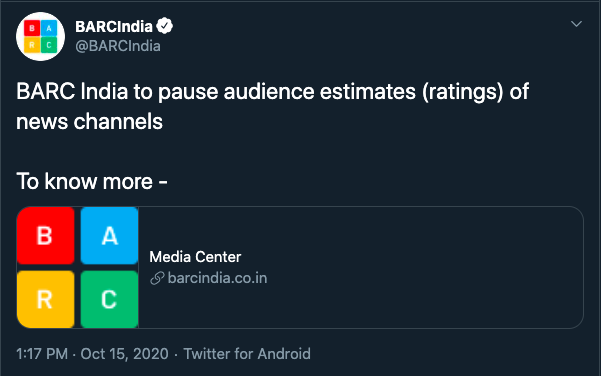 Amid mounting pressure over the alleged 'TRP scam', the world’s largest television rating measurement agency the Broadcast Audience Research Council (BARC) has announced to pause the weekly ratings for news channels for a period of 3 months while it reviews the existing system.

In a statement released earlier today, the rating agency said that the decision has been taken to "review and augment the current standards of measuring and reporting the data of niche genres, to improve their statistical robustness and to significantly hamper the potential attempts of infiltrating the panel homes".

"Starting with the 'News Genre', the BARC will cease publishing the weekly individual ratings for all news channels during the exercise. This exercise is expected to take around 8-12 weeks including validation and testing under the supervision of BARCs Tech Comm. BARC will continue to release weekly audience estimates for the genre of news by state and language," a spokesperson said to the press.

This would cover all Hindi, Regional, English News and Business News channels with immediate effect, the agency added.

The BARC has been in the spotlight after the Mumbai Police summoned the heads of three channels including Republic TV for allegedly bribing the owners of TV sets with BARC measurement devices attached to alter viewership data in their favour. While the two local channels saw their owners arrested, Republic has raised concerns as to the investigation’s validity.