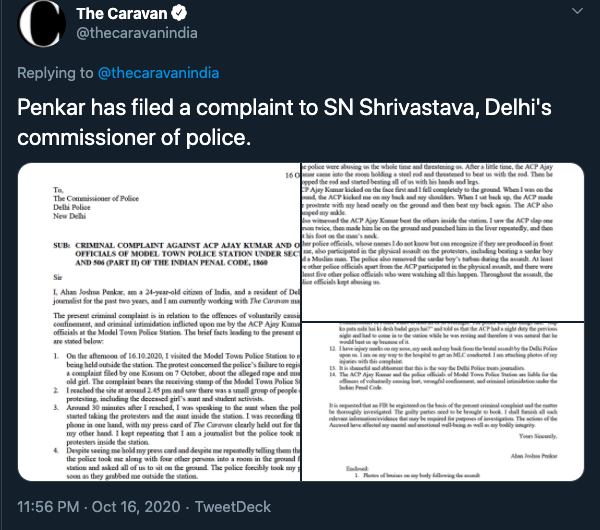 A journalist working with The Caravan magazine was on Friday allegedly assaulted by a senior police officer in North Delhi and detained for nearly four hours, while he was reporting on the protests that broke out at Delhi’s Model Town against the rape and murder of a 14-year-old girl.

24-year-old Ahan Joshua Penkar has been a journalist for two years now. Penkar is alleging that he was detained by the police around 3.15 pm and subsequently taken to Model Town police station where he was later beaten up by the Additional Commissioner of Police Ajay Kumar. Penkar also claims to have repeatedly shown the police his press identity.

During his assault, an officer had reportedly said to Penkar, “Aap ko pata nahi hai ki desh badal gaya hai? (Don’t you know that the country has changed?)”

“The ACP kicked me in the chest. I’m shaken. He threatened to beat us with a steel rod,” Newslaundry quoted Penkar as saying. “They lifted me by my trousers and took me inside the station. I was forced to delete the videos and photos from my phone.”

Penkar also said that other than him, the police had also assaulted 22-year-old Delhi University student, Ravinder Singh whose turban came off during the beating and another man whose name Penkar couldn’t remember though he did remember that the ACP had hit the other man in the liver multiple times and then stood on his neck.

Penkar has submitted a formal complaint to the Delhi Commissioner of Police SN Srivastava where he has detailed the ACP’s actions, his injuries and also attached photographic evidence.

ACP Kumar refused to comment on the allegations. DCP (Northwest) Vijayanta Arya denied the allegations saying, “No one was beaten up, some people were detained. We have not received a complaint yet and if we receive one, we will conduct an inquiry.”

ACP Kumar had made the news for the wrong reasons before too, in December 2019. A video of him allegedly asking students to vacate their PG rooms in Mukherjee Nagar went viral, after which the police claimed the video was doctored.

Earlier in August, three journalists from The Caravan magazine were attacked by a mob in North East Delhi’s Subhash Mohalla neighbourhood while they were reporting on a story.

Explainer: The Assam-Mizoram Border Issue and Assam's Other Boundary Disputes