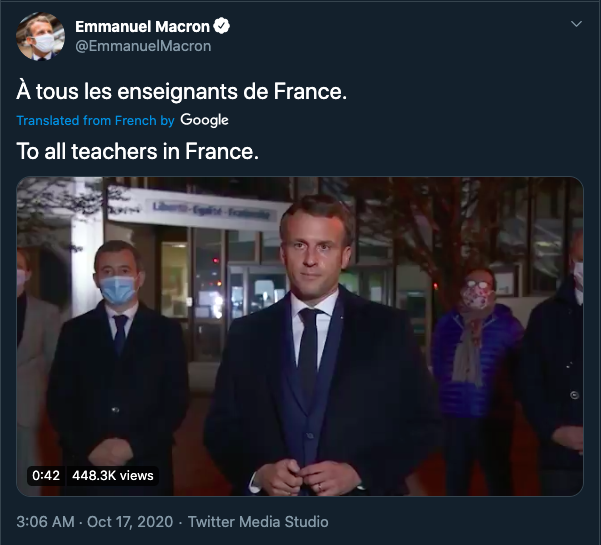 A history teacher who had shown caricatures of the Prophet Mohammed in class, was on Friday was decapitated and his assailant shot dead by French police as they tried to arrest him, police and prosecutors said to The Associated Press.

The gruesome killing of the teacher occurred in the town of Conflans-Sainte-Honorine to the northwest of Paris at 5 pm. The killer had apparently posted photographs of the severed head on Twitter which prompted the cops to his location. Following a foot chase, the suspect was killed by police in an adjoining district called Eragny.

A police official said that the suspect, armed with a knife and a plastic pellet loaded airsoft handgun was shot dead about one kilometre from where he killed the teacher. The police said that after he refused to respond to repeated orders to put down his arms and began acting in a threatening manner, they shot him.

Investigative officers of the Paris Police told Euro News that the victim, who taught history at the Bois d’Alene school, had shown his students cartoons of the Prophet of Islam from satirical newspaper Charlie Hebdo during a class debate on freedom of expression on October 5. This had sparked complaints from a number of parents and one of them had lodged a complaint against the teacher. However, the cops added that the suspected killer did not have a child at the school.

The suspect’s identity was not made public. However, the French channel BFM TV reported that the suspect was an 18-year-old Chechen, born in Moscow. That information could not be independently confirmed by the AP.

The French equivalent of the CBI, the Office of the Juge d’instruction have opened an investigation concerning the murder with a suspected terrorist motive.

Soon after the incident reached the airwaves, President Emmanuel Macron condemned the act as an “Islamic terrorist attack.” He visited the school and met the history teacher's colleagues on Friday evening. To the press, he said afterwards: "One of our citizens was assassinated tonight because he was a teacher because he taught students about the liberty of expression, the liberty to believe or not to believe.”

France has offered asylum to many Chechens since the Russian armed forces waged war against Muslim separatists in Chechnya in the 1990s and early 2000s, and there are Chechen communities scattered around France. The country has seen occasional violence involving its Chechen community in recent months, in the Dijon region, the Mediterranean city of Nice, and the western town of Saint-Dizier believed linked to local criminal activity.

Friday's attack comes amidst the ongoing trial against the terrorists responsible for the January 2015 attack on the Charlie Hebdo offices where they had gunned down 12 people. The terrorists had stated that the attack was revenge for parodying the Prophet. To commemorate the beginning of the trial, the paper republished the cartoons on September 22 prompting another attack which injured two of its journalists on September 24.

At the moment, the Macron administration is working on a bill to address Islamist radicals who the French authorities claim are creating “a parallel society” outside the values of the country. The bill is slated to strengthen a 1905 law that officially separated church and state in France. The proposed measures include stricter oversight of the financing of mosques and closer scrutiny of schools and associations exclusively catering to religious communities..

France has the largest Muslim population in Western Europe with up to 5 million members, and Islam is the country’s second most popular religion.