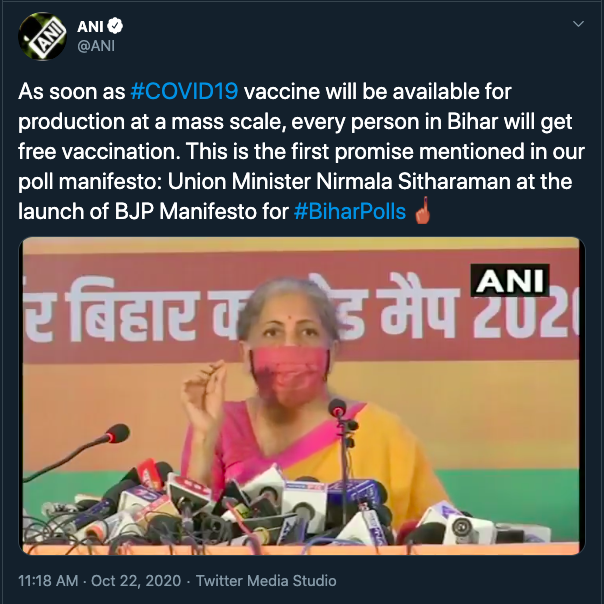 The Bharatiya Janata Party, on Thursday, released its manifesto for the Assembly polls in Bihar with the first promise in it being the free distribution of COVID-19 vaccine across the state should it get approved by the Indian Council of Medical Research (ICMR).

Finance Minister Nirmala Sitharaman who released the manifesto in Patna said, “As soon as a COVID-19 vaccine is available for production on a mass scale, every person in Bihar will get free vaccination. This is the first promise mentioned in our poll manifesto.”

The announcement led to an explosion of criticism against the BJP on social media with the main bones of contention being whether Bihar would still get the free vaccine if the voters reject the BJP and whether other states in the country would get the vaccine for free. Criticism has also been levelled at the immorality of the move. The Wire has interviewed two former election commissioners, both of whom agree that the announcement is a violation of the model code of conduct for campaigning.

“In the migrant workers’ crisis, Bihar CM & Deputy CM said they won’t let Biharis enter. The PM said vaccines can’t possibly be made before a year. 1000 Biharis died due to Covid. Do central ministers care? They’re deriding people of Bihar,” Congress leader Randeep Singh Surjewala said at a press conference soon after the announcement. He also accused the BJP of “deriding the people of Bihar.”

However, Tamil Nadu and Madhya Pradesh took a cue from Sitharaman’s statement and within hours their governments declared that people of these states shall have the vaccine for free, as well.

“I would like to announce that as soon as the vaccine is developed (and made available to states) all people in Tamil Nadu will be immunized and the government shall bear the cost,” Tamil Nadu Chief Minister Edappadi Palaniswami said in Pudukkottai during an official visit. Elections are due in Tamil Nadu in 2021.

Amid the fallout, the BJP has come out in defence of its manifesto with IT Cell head Amit Malviya saying, “Like all programmes, Centre will provide vaccines to states at a nominal rate. It is for state Governments to decide if they want to give it free or otherwise. Health is a state subject and the Bihar BJP has decided to give it free.”

Union health minister Harsh Vardhan last week said India is expected to have a Covid-19 vaccine in a few months and the country should be in the process of delivering it to people in the next six months. Currently, COVID-19 vaccines are in various stages of trials across the globe.

Elections for choosing the 243-member legislative assembly in Bihar will be held in three phases with the first beginning in six days on October 28 followed by the other two on November 3 and 7 respectively. The results will be declared on November 10.