Goa is Bustling - with Citizen's Protests 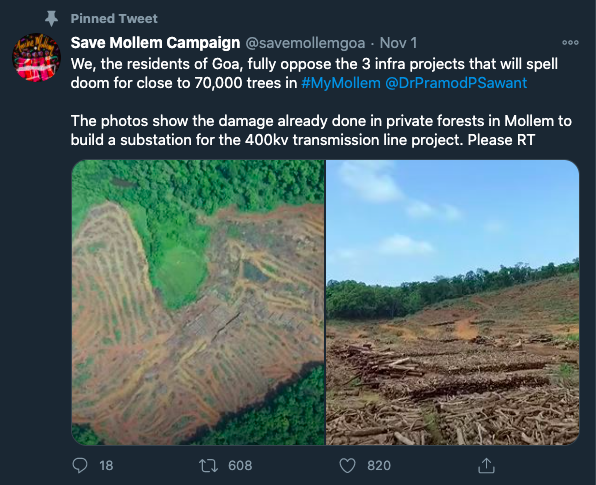 Thousands of Goans gathered outside the Chandor Church in South Goa in a peaceful demonstration all night to protest against the government’s move to double-track the south-western railway line. Locals sang songs, beat drums, shouted slogans, and sounded a stern warning to the state government and the railway authorities that Goans are opposing the project.

All this, after the railway officials carried out the laying of a railway line at one gate crossing, under full police protection last week. The second one scheduled on the night of November 1 saw the railway officials themselves not turn up, as thousands of locals had begun gathering since late evening to oppose the work that was supposed to be carried out.

This show of strength, locals say, is just the beginning to many such people’s movements that are set to spark across Goa. Last week, the Dando football ground in the Benaulim area of South Goa witnessed a massive crowd of people gathered. Neither was a village football game being played, nor was a political speech being delivered by a party; it was a gathering of local citizens – Goans, united for a cause. A cause, as simple as ‘safeguarding the identity of the state’ from the onslaught of large-scale destruction.

The core identity of Goa, that of being lush green, the beautiful paddy fields, abundant wildlife and waterfalls are facing imminent danger, as these are being threatened by three mega projects which, if completed, will be a deathblow to the state’s ecology and the people’s livelihoods.

Goa’s fight right now is not just against the double-tracking of the railway line, it is also against two other projects – the doubling of the national highway between Panaji and Belgavi, and a power transmission line – all passing through pristine areas of the UNESCO world heritage, the Western Ghats. The state’s largest protected areas, Mollem National Park and Bhagwan Mahavir Wildlife Sanctuary, are threatened by these three linear projects that will divide the protected areas into three different segments, in turn, resulting in massive damage to the ecology and wildlife of the area.

With this environmental concern, the rail and road projects are also being opposed as locals are worried that these are being done to facilitate increased coal transportation to Karnataka.

Goa’s Mormugao Port Trust (MPT) has been handling coal at two of its berths, for some years now. All this began after iron ore mining was stopped by the apex court, and MPT had to find alternate ways to survive. This, in turn, provided opportunities for corporate companies like Jindal and Adani to bring in coal for their plants in Northern Karnataka. A port in Karnataka, the one at Mangalore was available, but cutting across the breadth of Goa was a cheaper option for these companies. An Indian Express investigation in 2017 pointed out that 25 million tonnes of coal – enough to fill a football field – would be unloaded each year by 2020. These numbers are expected to double by 2030.

It is these coal trains that are choking the villages and rich paddy fields wherever they pass. Houses along the route experience dinner tables covered in black dust, and to make matters worse, several respiratory ailments have been recorded among many, especially children, living along these routes. The road route also witnesses coal transportation, and Goans fear that the two projects – railway and highway expansion – are being done for the sole benefit of satisfying these ‘crony capitalists’. And their concerns are valid.

As per the Sagarmala 2016 Report, an increase in cargo handling at the port would mean that transport connectivity to the port will have to be enhanced, and these projects are a part of this whole plan, Goans claim. All these are done under the cover as ‘infrastructure projects for the benefit of locals’, but no clear-cut benefits can be seen for Goans. Besides, all the three projects have been challenged before the courts, and activists believe that the clearance granted will not suffice in a court of law as the projects pass through protected areas.

During the month of October this year, Goa has witnessed widespread protests, largely centred around the belts of South Goa. In fact, every single day of the month witnessed road rallies, village football grounds turning into meeting points for awareness sessions, and corner village talks by concerned elders. Under the approaching winter skies, citizen movements are building up across the state, and all that Goa and Goans are seeking is support from across the country.

Goa, amid the pandemic, is fighting many battles – saving the forests of Mollem, the spectacular Dudhsagar waterfall along the Western Ghats, the rich and cultural heritage houses along Cansaulim and Majorda, the vast paddy fields in Chandor – and most importantly, the battle to save the state’s identity and ensure the safety of every Goan, all of which are under threat today.

With multiple people’s movements having successfully achieved their goal of spreading awareness throughout October, November is going to be a crucial month. Anger is brewing up across the state, and these people’s movements against large-scale destruction are only going to amplify. NGOs, including Goencho Ekvott and Goyant Kollso Naka (We do not want coal in Goa), are at the forefront of these citizen movements, and have played a key role in getting communities together for this cause.

Goa needs its voice to be heard, and locals hope that the media across the country helps take these local voices to a larger platform.

All destructive projects which are not wanted by the people should be thrown out.