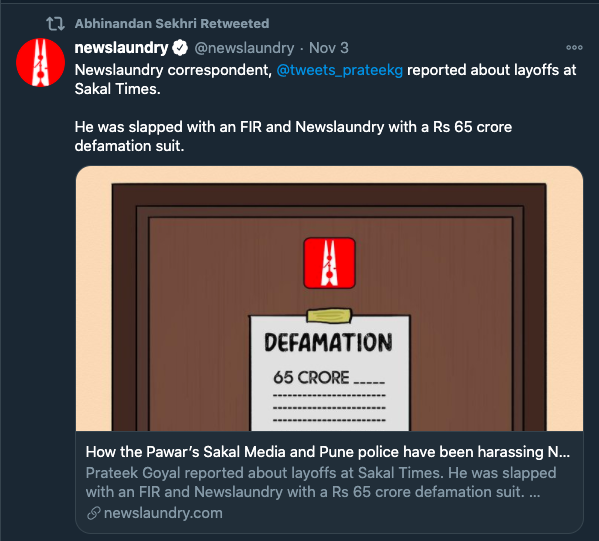 Prateek Goyal was not home when the police came to visit him on the afternoon of September 16 at his Pune residence. They were, according to Goyal’s neighbours, accompanied by a van with the Sakal Media Group logo.

On calling the Vishrambaug station where the officers had said they were from, Goyal was informed about an FIR against him for using the trademark of Sakal Group in an article on the paper’s mass retrenchment of its editorial staff.

On March 27, Goyal had reported for Newslaundry that the Sakal Media Group - one of Maharashtra’s leading media houses - had fired 15 employees in violation of a government directive to not terminate workers, or cut their wages during the pandemic. Said employees were all on the editorial division of Sakal Times, a daily newspaper run by the Sakal Media Group.

Two and a half months later, the Sakal Times laid off its entire editorial staff of 50-60 people and shut down its print edition. Goyal reported about this, too. The story was published on June 11.

Five days later, Newslaundry got a defamation notice amounting to Rs. 65 crore from Sakal Media Pvt Limited. The online portal’s legal team promptly responded to the notice saying that the allegations were baseless and asked Sakal Media to point out any facts that they found disputable. Newslaundry says that Sakal did not respond, however, they filed an FIR against Goyal a few months later, on September 16.

“Goyal while publishing said articles did not seek prior permission from Sakal Media Group and misused its official logo (trademark) cunningly,” the notice reads, “It is because of the said act that our market share has crumbled leading to huge economic losses and the group office bearers and employees had to face the brunt of it unnecessarily.”

Newslaundry approached the Mumbai High Court seeking to quash the FIR on October 20, but the HC ruled that the police can continue their investigation. The matter will be heard again on November 24. Newslaundry’s legal team also moved the Pune district court seeking anticipatory bail for Goyal.

Talking to Newshound India Foundation, Goyal said that after getting the bail, he had visited the Vishrambaug police station on October 30. Here, he says that he was outright harassed by the cops. “The Station House Officer, Dadasaheb Chuddappa said to me, ‘You think you can damage Sakal? Sakal just fired 50 reporters like you. They are too big and you aren’t even a proper reporter. You don’t have a press like Sakal. What is Newslaundry, it is just an online thing,’” the reporter said.

Two days ago, the police contacted Goyal, once again. This time, they wanted to seize his laptop. “I refused right away,” he said, “They did not have a notice nor a warrant.”

Goyal said that he told the officer who made the order that he would only give his laptop up if the police would provide him with the device’s hash code. The police refused. A hash code is a unique electronic signal of a computer’s hard-drive. Every time, something is added or removed from the hard drive, the code changes. The police are bound to provide the hash value of a seized laptop or phone to its owner.

The police have, however, insisted that he surrender the laptop today. Goyal has contacted a lab to clone his hard drive before he brings it with him to the police station.

The Sakal Media Group Pvt Ltd is owned and run by the politically influential Pawar family. The group’s board of directors is chaired by Pratap G Pawar, while his son Abhijit Pawar is the managing director. Pratap Pawar is the brother of Nationalist Congress Party (NCP) chief Sharad Pawar, whose daughter Supriya Sule is also on the board. Pratap and Sharad Pawar’s nephew, Ajit Pawar, is the deputy chief minister of Maharashtra.

Newshound India Foundation reached out to the Vishrambaug police station for comments but while we did receive confirmation of the FIR’s registry there, the investigating officer, Deepak Jadhav, said that he would not comment on an ongoing investigation. We also reached out to various representatives of Sakal Media but are yet to receive any response. The story will be updated if we receive any comments from their side.