The Many Hues of Tejashwi Yadav: From Failed Cricketer to the Youngest Leader of Opposition 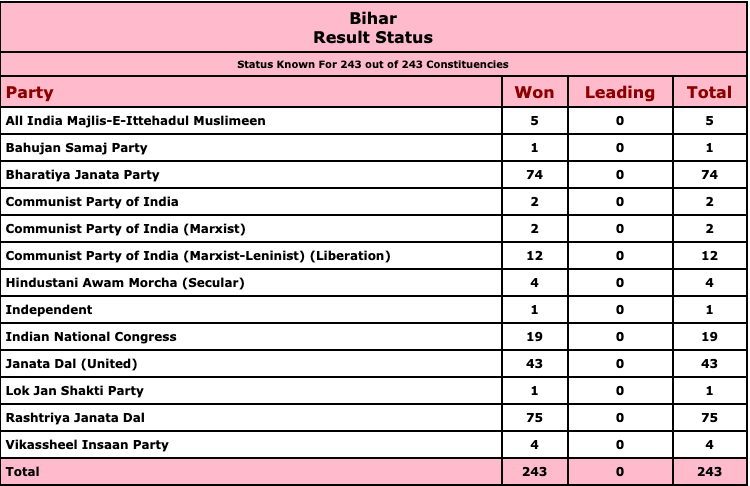 Rashtriya Janata Dal (RJD) leader Tejashwi Prasad Yadav, the youngest ever Deputy Chief Minister and Leader of Opposition in the country’s history has once again become the talking point following his becoming the face of the Mahagathbandhan coalition in the Bihar Assembly elections. He turned 31 on Monday.

With his ailing father, former Chief Minister Lalu Prasad, lodged at a Ranchi jail, far away from the scene of political action in Bihar, the RJD’s steering wheel is now firmly in his Tejashwi’s hands, who by the looks of the election results this year, seems to be finding it difficult to come out of his father’s formidable shadow.

Born on November 9, 1989, four months before his father, then aged 42, became the Chief Minister of Bihar for the first time, Tejashwi is the youngest of Rabri Devi’s nine children. After completing his schooling in Delhi, he signed up for the Delhi Daredevils where he remained in the reserve bench for four years as well as the Jharkhand cricket team for whom he played 8 matches across all formats.

Following his retirement from professional cricket, Tejashwi joined his father’s party and according to party insiders was the one who convinced Lalu Prasad to form an alliance with Nitish Kumar’s Janata Dal (United) following the poor performance of both the parties in the 2014 general election in Bihar. He won his Raghopur seat in the 2015 Bihar Assembly elections and was appointed Deputy Chief Minister in the fifth Nitish Kumar cabinet.

In 2017, the CBI and the ED launched a probe in relation to money laundering in a 2004 corruption case involving the Indian Railway Catering and Tourism Corporation, against the entire Yadav family. This led to Nitish Kumar pulling the JDU out of the alliance and forming a new government along with the BJP. A year later, the Delhi High Court granted him relief after he maintained that he could not have played a role as the allegation levelled on him happened at a time when he was only 14 years old.

By March 2018, Tejashwi had become the de facto leader of the RJD. He apologised to the people of Bihar for "lapses and mistakes" that may have been committed by the party during its tenure in the state government and was involved as the leader of opposition in organising food relief in the aftermath of the 2019 Bihar floods.

However, today’s media-savvy political rising star is a stark contrast with the Tejashwi Yadav of May 2019, when the RJD suffered an enormous loss in the Lok Sabha elections. It was the first election of the RJD without Lalu Prasad in charge and while elder brother Tej Pratap formed the Lalu-Rabri Morcha, Tejashwi faced criticism for “not accommodating” allies, especially the CPI’s rising star Kanhaiya Kumar, due to “insecurity”. There were reports of him not being “respectful” towards the RJD’s senior leaders.

He did not even cast a vote in the elections and disappeared from the public spotlight citing a ligament injury and leaving it to others to face the media trial following the defeat. The RJD had drawn zero in the Lok Sabha elections.

In an interview with his close aide Sanjay Yadav, The Hindu’s Shobhana Nair had asked, “So what has changed in these 18 months?”

“Nothing,” Sanjay Yadav had replied. “The ‘Delhi media’ have discovered Tejashwi only now. A false perception was created that he [Tejashwi] doesn’t have a connection with the party cadres or the voters. If that was the case, the party would have disintegrated after Nitish Kumar returned to the NDA in 2017. Did that happen?”

Senior RJD leader and Rajya Sabha MP Mano Jha, who has been associated with Tejashwi since 2012, told The Indian Express that the youngest Yadav is a keen learner. “He has the ability to listen to everyone from people of Bihar to experts who closely study the State and then make his mind independently,” Jha said.

The RJD might have lost these elections, but 31-year-old ‘Yuva Bihari’ Tejashwi has definitely arrived.