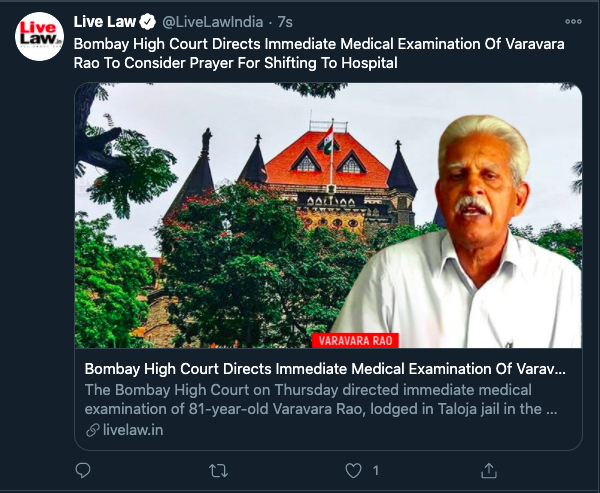 Telugu poet and activist Dr. Varavara Rao, who continues to be in jail for almost three years in the Koregaon-Bhima case, will not be released on bail, for now, the Bombay High Court said earlier today after Rao’s wife Pendyala Hemlatha, citing her husband’s worsening health, had approached them for his release from jail.

"He is bedridden. He is in diapers. He can't control urination. He is with a urine bag. His catheter has not been removed. Is this man going to run away from justice?" The Rao family's lawyer senior advocate Indira Jaising had argued before the bench, saying that his health was rapidly deteriorating.

“I am seeking an urgent interim relief to shift Varavara Rao from Taloja jail to Nanavati Hospital. Ultimate relief I am seeking is that he be set at liberty as his rights are being violated," Jaising said. She added that Taloja jail, where Rao is imprisoned, does not have the infrastructure of a super-specialty hospital to treat a person with his conditions “In this condition, he cannot even stand trial,” she told the court.

The court said doctors could examine him via video call and would visit him if needed. It also added that it preferred to arrange the video call today, if possible, and said the case would be heard again on November 17.

"To assess the present condition of Varavara Rao, it will be appropriate to have a video medical examination. All parties agree that video consultation can be arranged today or tomorrow morning by doctors of Nanavati hospital who made the July 30 report," the court said.

The case, being investigated by the National Investigation Agency, involves allegations of provocative speeches made at the Elgar Parishad conclave held in Pune on December 31, 2017, which the police claimed triggered violence the next day near the Koregaon-Bhima war memorial.

Varavara Rao and nine other activists were accused of having links to Maoist organisations in the Elgar Parishad case. Rao, the leader of "Veerasam", an association of revolutionary writers, had strongly denied the charge.