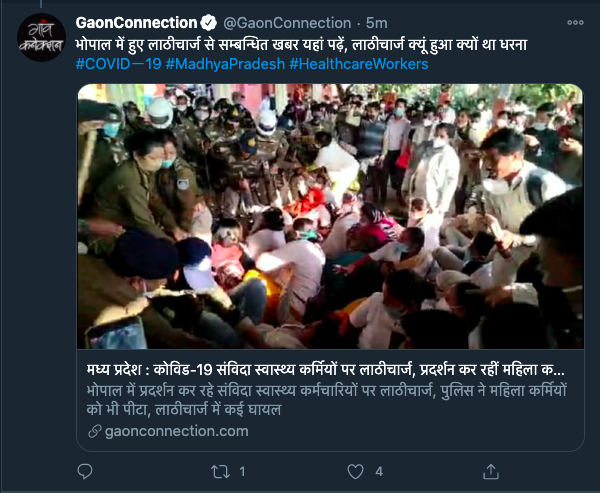 Over 500 COVID-19 health workers protesting against being laid off from work were lathicharged by the Bhopal police. The incident was reported in the Madhya Pradesh capital where demonstrators had gathered for the past three days to mark their protest against being removed from the jobs assigned three months ago.

The Free Press Journal reports that the health workers struck work across the district and also staged demonstrations at the Regal Square along with shouting slogans against the administration and government.

Agitators had submitted a memorandum to the Chief Medical and Health Officer Dr Pravin Jadia and demanded him to recruit them as contractual employees in the department and also to fill the vacant positions through them.

“We have been working for the last 8 months with the department. Now, the administration is increasing and decreasing our contract on the basis of COVID cases. We request the government to merge us as contractual employees by which we will not lose our jobs and the department gets a workforce,” the protestors said.

They also expressed anger over the cane charge on their counterparts in Bhopal who were demonstrating to press the demands and said that they will continue to strike work till their demands are met.

Meanwhile, the CMH Officer Dr. Pravin Jadia said, “These employees were recruited on a temporary basis for three months. They were already informed about the terms and conditions. We have not removed their work and their contract has been renewed till December 31.”

Dr. Jadia also said that no work was affected by the agitation as they deployed other staff for the same.

According to reports, the MP government had hired 6,213 health workers on a temporary basis, when the COVID-19 crisis had escalated. Their three-month term ended on November 30, and half of them were laid off, Dainik Bhaskar reported.