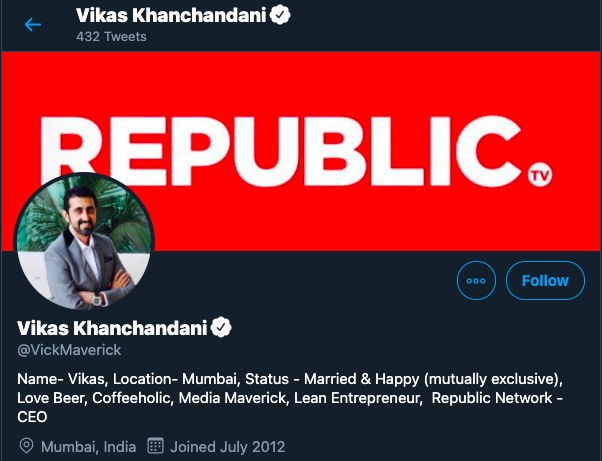 ﻿Republic TV CEO Vikas Khanchandani has been arrested by the Mumbai Police in the TRP manipulation case -- the 13th person to be arrested in the case so far -- early Sunday morning.

Milind Bharambhe, the joint commissioner of police (crime) confirmed the arrest at a 10 AM press conference. Khanchandani was produced before the court later in the day. However, before being brought before a judge, he had previously been questioned by the investigators two times.

A senior officer in charge of the investigation told the Indian Express that Khanchandani’s statement was recorded twice and his role was identified during the interrogation of Republic TV’s distribution head Ghanshyam Singh who was arrested and charge-sheeted earlier by the Mumbai Police.

During the Crime Branch’s probe, it came out that some cable operators had used dual LCN (Landing Channel Number) technology which allows the user to view one channel while they are recorded as watching two channels at a time via manipulated channel numbers. Police sources told Hindustan Times that Republic TV officials also contacted cable operators to fix LCN and LCN promotion. They added that Khanchandani knew everything as he was part of Republic’s internal WhatsApp groups where discussions about LCN and LCN promotion took place.

The TRP manipulation scam came to light in October, after an official at Hansa, the group in charge of monitoring the BARC issued TRP measurement devices, lodged a complaint with the Mumbai Police following which the owner of Fakt Marathi and Box Cinema were arrested. In November, The Mumbai Police Crime Branch filed a 1,400-page charge-sheet in the alleged a fake Television Rating Points (TRP) case, naming six channels, including those of Republic Media Network and News Nation, as allegedly paying money to boost TRPs for around two years.

The charges applied in the case relate to cheating, forgery, criminal conspiracy and destruction of evidence with the maximum sentence of 10 years. All channels named in the FIR have denied any wrong-doing.

The Supreme court last week had turned down the plea filed by ARG Outlier Media Private Limited which owns the Republic Media Network seeking protection for the group and its employees from the cases filed against them in Maharashtra.