AIIMS Nurses Call Off Strike After Talks With Director 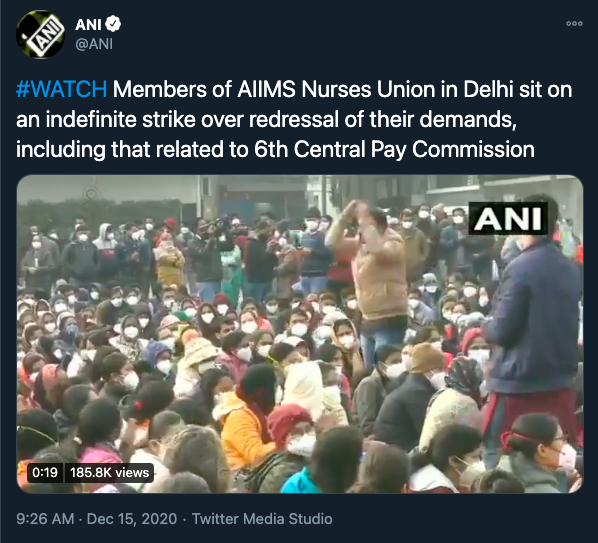 Following negotiations with the director of the All India Institute of Medical Sciences (AIIMS), the 5,000 nurses who had been on an indefinite strike since Monday afternoon over the lack of clarity of their salary structure under the Sixth Pay Commission winded down their dissent.

On Tuesday, the Delhi High Court, which was approached on Monday by the AIIMS administration, said that the nurses could not continue their indefinite strike as they were in violation of the Industrial Disputes Act as well as an earlier order by the HC prohibiting AIIMS employees against resorting to such action.

A single-judge bench of Justice Navin Chawla restrained the nurses from continuing with their strike and asked them to respond to the hospital's appeals, since the administration were willing to meet their demand.

Why were the nurses protesting?

In a letter to the Director of AIIMS dated November 13, the nurses listed 23 unresolved demands. The first among them is the aforementioned demand to address the Sixth Pay Commission anomaly with respect to their salaries. The AIIMS Nurses Union said their salary was fixed at Rs 18,460 per month but they receive Rs 17,140. They said, "Our demand is not a pay hike, rather, that we be paid what is mentioned under the Sixth Pay Commission." They had written to the administration early in November, stating that they would go on an indefinite strike if the issues were not resolved soon.

The nurses are also protesting against the reservation on the basis of gender at the AIIMS which requires 80% of the nursing staff to be female. The union says the quota is leaving many qualified men unemployed.

Their other demands are related to the qualification pay, pension scheme, modifications in job description and cadre restructuring, among others.

In a video message to the nursing union on Monday, AIIMS director Dr Randeep Guleria appealed to all the nurses to not go on strike during the pandemic.

"The nurses union has put in 23 demands and almost all of the demands have been met by the AIIMS administration and by the government. There is one demand which they have insisted upon and this is basically a perceived anomaly in the fixation of the pay, as far as the 6th CPC is concerned. It, however, seems inappropriate that when the country is fighting a pandemic and we are fighting for our near and dear ones to save lives and we know that we need to work for few more months, and the vaccine may provide a solution, unfortunately, at this point of time the nurses union have gone on a strike," Dr Guleria had said to The Indian Express.

When the nurses refused to relent, he and the administration approached the Delhi High Court with a petition to stop the dissent. The AIIMS legal team were particularly insistent on the HC's previous ruling that had deemed protests by AIIMS staff illegal.

The agitation comes following mounting complaints by nurses across the country. One major complaint is that of sexism which sees female nurses being cornered to perform COVID duties by male compatriots and pathologists that do not fall under their charter. 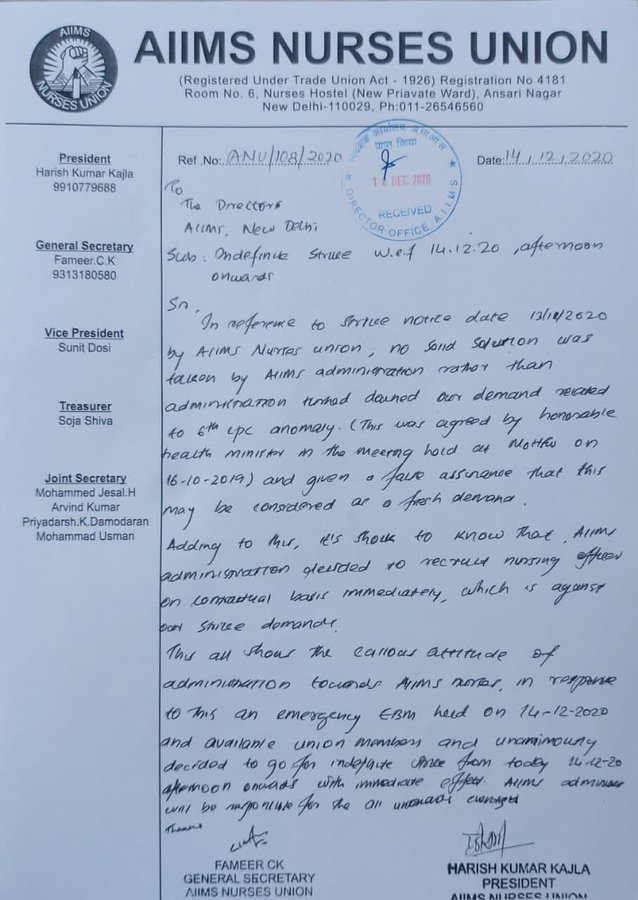