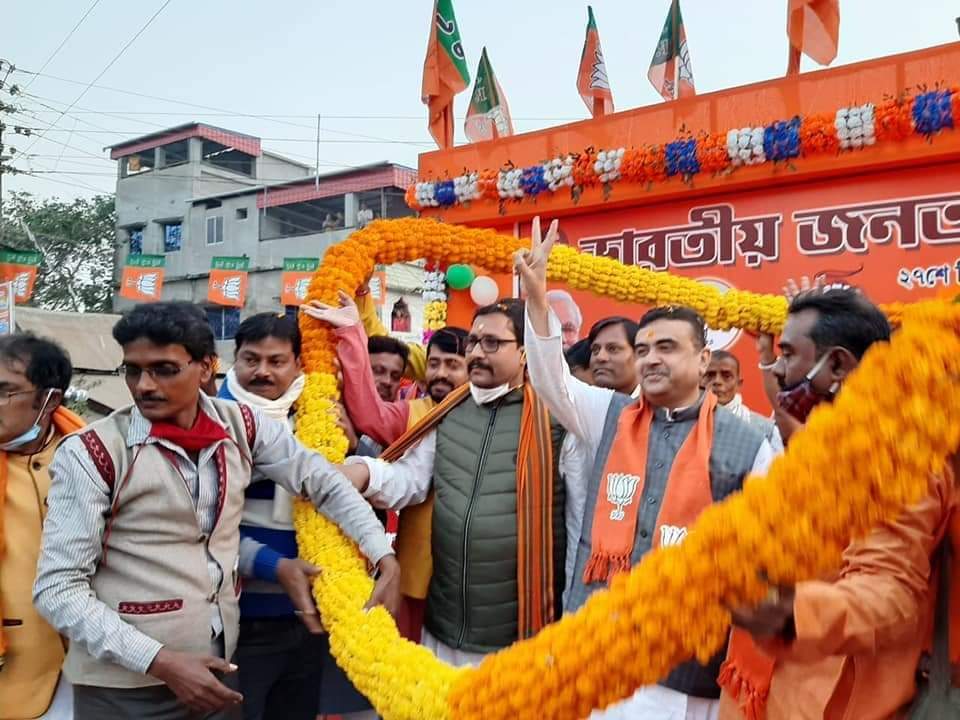 One of Mamata Banerjee’s most trusted aides and the face of the Nandigram movement in Bengal that catapulted the Trinamool Congress to power in 2010, Suvendu Adhikari, has joined BJP, ending months of speculation. While he officially switched on December 19 under the watch of Union Home Minister Amit Shah, Adhikari took out his first roadshow outside the BJP party office in Kolkata earlier this morning.

Flanked on either side by party president Dilip Ghosh and fellow TMC defector Mukul Roy, Adhikari was greeted by an enthusiastic crowd with the who’s who of the Bengal BJP consisting of the likes of Locket Chatterjee, Babul Supriyo and SS Ahluwalia in the front row.

Tearing into his former party, Adhikari began his speech saying, “I am ashamed of my 21-year-old association with the Trinamool Congress. The party I had once joined is not the same anymore. There is no discipline in its ranks. It looks more and more like a company every passing day.”

Outside the roadshow campus, BJP workers armed with sticks went about directing the traffic flow. These are ground-level workers, mostly brought over from the suburbs for additional manpower. Shibhashish Dhar is one of them. He hails from Nandigram, Adhikari’s constituency. When asked if he feels content about his leader’s switch, he said, “Sir, Mr. Adhikari has led us for a decade. Under his leadership, we saw Nandigram develop. Where there was not even a bus stand, there stand factories now. People have jobs. Didi did not bring about these changes; people like the Adhikari family and their followers did. We worked for the TMC to help the people but they were corrupt. Now we work with BJP. We are still helping people but at least, we don’t answer to frauds now.”

Another worker -- a tribal man from the Paschim Medinipur district who wished to remain anonymous -- said, “I think I made a mistake coming here. Suvendu Babu had been a good leader and despite my reservations against the Centre, I followed him here. But after coming to Kolkata, I see that my concerns and the concerns of the tribal people are not a part of the agenda here. I feel insulted. Are we just a vote bank to him?”

The Adhikari family has been in power in the southwestern parts of Bengal for decades now. Suvendu's father Sisir Adhikari is serving his third term as MP elected on a TMC ticket from the Contai constituency in 2019 as well as a former Minister of Rural Development in the second Manmohan Singh ministry. Suvendu is the eldest of Sisir’s four children. Among the others, Dibyendu Adhikari is a TMC MP from the Tamluk constituency and Soumen is the chairman of the Contai municipal corporation. Analysts predict that the family has an influence on around 110 seats in the upcoming elections.

As the head of the TMC’s youth wing, Suvendu Adhikari’s named figured in the 2013 Sarada Group financial scandal and the Narada Ponzi scheme that followed shortly after. In fact, during a sting operation, Adhikari and fellow BJP member Mukul Roy (then a minister under the first Mamata administration) were caught on video accepting wads of cash as alleged hush money. The BJP had put up an edited copy of this video on its Twitter handle in the run-up to the 2015 state elections. The video was deleted sometime earlier this month.

Adhikari left his position as transport minister on November 27, months after reports of a rift between him and the TMC leadership emerged in Bengali media. He followed that up by resigning from his MLA position on December 16 and his AITMC membership on December 17. He joined the BJP along with TMC MP Sunil Mondal and nine sitting TMC and Left front MLAs on December 19 during Amit Shah’s second Bengal rally.