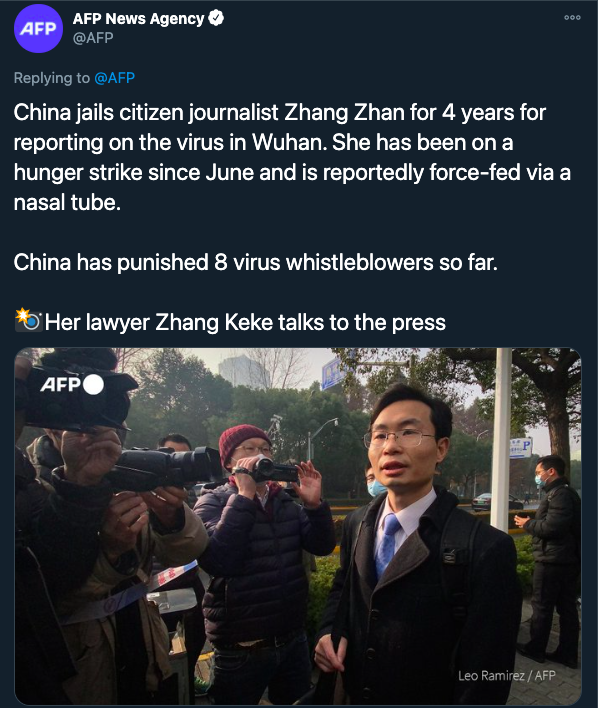 Citizen journalist Zhang Zhan was sentenced at a brief hearing in Shanghai a court on Monday for allegedly “picking quarrels and provoking trouble”, a charge used against several reporters and activists for bringing attention to the chaotic initial stages of the outbreak.

The 37-year-old former lawyer was initially detained in May and has been on hunger strike for several months. Zhan’s lawyers say she is in poor health.

Her live reports and essays were widely shared across social media platforms in February, grasping the attention of authorities, who have punished eight virus whistleblowers so far in a bid to withdraw criticism of the government's response to the outbreak.

In China, the news media has been functioning under the direct control of the state. Some citizen journalists try to offer more independent reporting, which they post on the internet and social media platforms. But their work is often censored and they are routinely punished.

Beijing has congratulated itself for ‘extraordinary’ success in controlling the virus inside its borders, with an economy on the rebound while much of the rest of the world stutters through painful lockdowns and surging caseloads a year on from the start of the pandemic in Wuhan.

The government’s way of managing this city has just been intimidation and threats,” she said in one of her videos. “This is truly the tragedy of this country.”

That turned out to be her last video. In May, Ms. Zhang abruptly stopped responding to messages. Her friends later learned that she had been arrested and brought back to Shanghai, accused of spreading lies and making up false information.

Zhang is one of the 10 people who were sentenced to prison terms at the Shanghai court yesterday. All the accused were allegedly involved in anti-government activities -- from Hong Kong protestors to Wuhan scientists who spoke to the media.