Former NDTV prime time face Nidhi Razdan said that she was the victim of a “highly sophisticated and coordinated” phishing attack that pursued her into believing that she was offered a job of an assistant professor at the prestigious Harvard University in the USA. 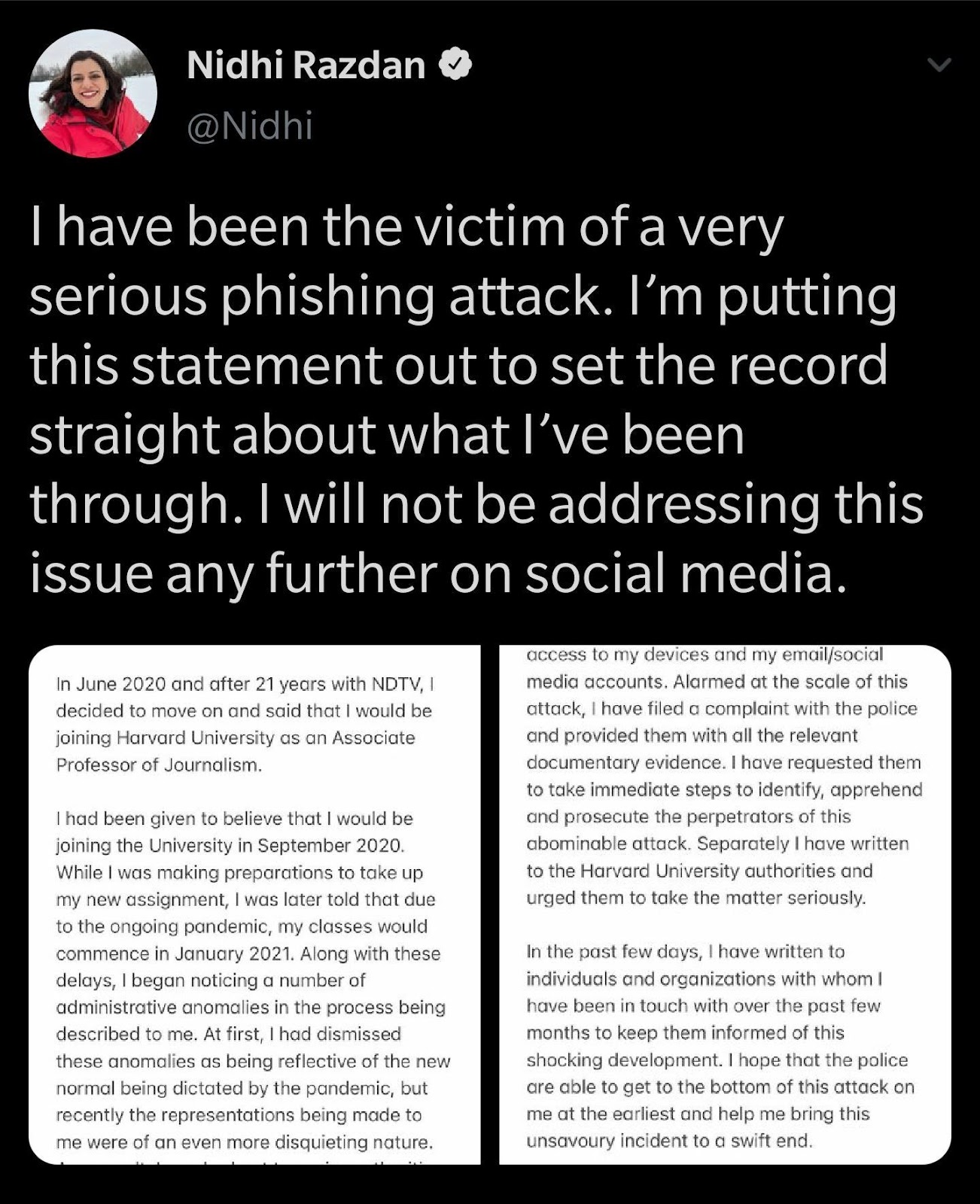 Writing in an NDTV blog post, Razdan broke down how things went down in this phishing attack that made her quit her job at the NDTV and wait for months without being paid or being able to do anything in the new job she was offered.

“Back in June 2020, I had announced on Twitter that I was moving on from NDTV after nearly 21 years to join Harvard University as an Associate Professor to teach journalism,” she wrote. “I truly believed it was a terrific opportunity. But here I am, almost eight months later, devastated by the realisation that this entire process to ‘hire’ me; my ‘appointment’ to Harvard was all part of an elaborate and sophisticated phishing attack to access my bank account, personal data, my emails, my medical records, passport and my devices like my computer and phone.”

“In November of 2019, I was invited to speak at an event organised by the Harvard Kennedy School in early 2020,” she said. “One of the apparent organisers of this event contacted me separately to say there was a vacancy for a teaching position and would I be interested.”

Razdan said she decided to submit her CV, thinking there was “nothing to lose by trying”. A few weeks later she was “interviewed” online for 90 minutes, the journalist said.

In response to criticism pointing out that as a journalist she should have at least second checked her offer’s validity, she said,  “It all seemed legitimate, the questions were thorough and professional,” she added. “I did a basic google search and found a journalism degree programme being offered by the Harvard Extension School.”

Harvard does indeed have an extension school teaching journalism. The programme is called the Master of Liberal Arts, Journalism degree. The college lists 500 faculty of whom 17 are categorised as journalism faculty. Considering that the school has tie-ups with multiple media houses including The New York Times and CBS, a number of the educators at the school are working journalists.

Razdan wrote she started to get frustrated with the delays. “I had been told a work visa had been issued in the US for me which would be sent to me only when travel was required,” she added. “I would have also needed a visa from Delhi but it never reached that stage since no travel was on the cards immediately.”

It was only when there were repeated delays in her salary disbursement, which she was told she would get from September onwards irrespective of class schedules, did she begin to feel that “something wasn’t right”.

Nidhi Razdan has alleged that the whole phishing attack was an attempt directly aimed at “stealing my money and taking my personal data to misuse it”. 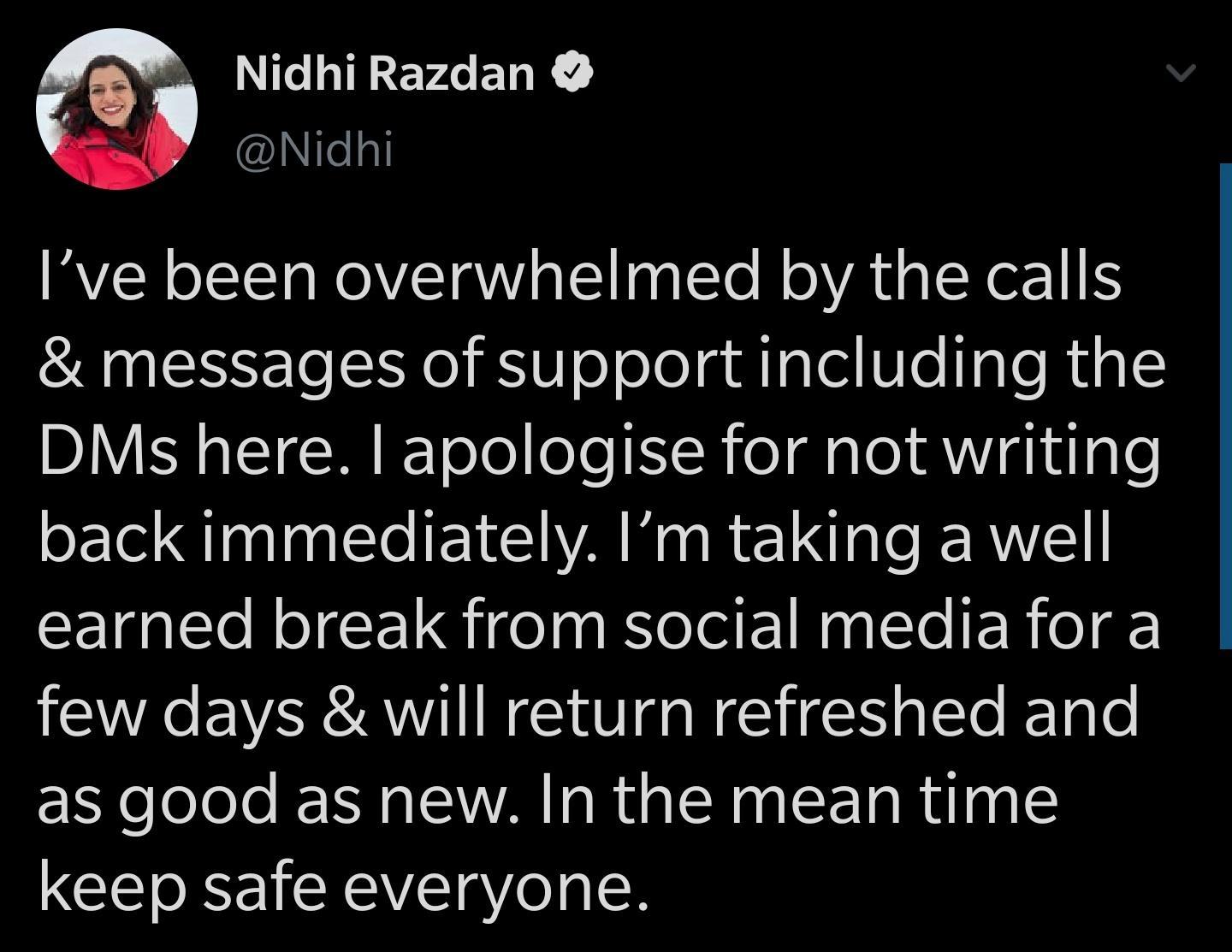 Razdan said she wrote back to Harvard's head of Human Resources but did not get a reply, and she wrote in January to the office of the Dean of the Graduate School of Arts and Sciences. “It was only earlier this week that I heard back from them telling me there was no record of my appointment and that the people claiming to be their HR staff do not exist!” the journalist said.

Razdan has now filed a police complaint against the “gross criminal act”, and had shared all documents with the police. She said that she could have done “more due diligence” and that she was “very shaken by this and keep kicking myself for being such an idiot.”