On Thursday, more than 100 employees of The New Yorker magazine represented by the New Yorker Union halted work for 24 hours. They announced that its members would not participate in the production or promotion of material for either the print magazine or the website.

The New Yorker Union said that the strike is over their demands for fair wages and an equitable salary structure. It represents 117 editorial staffers at the magazine, including copy editors, assistant editors, editors and web producers, but not staff writers.

The union issued an official statement, which stated the motive of the strike and the demands put forth by the workers on their official Twitter handle. 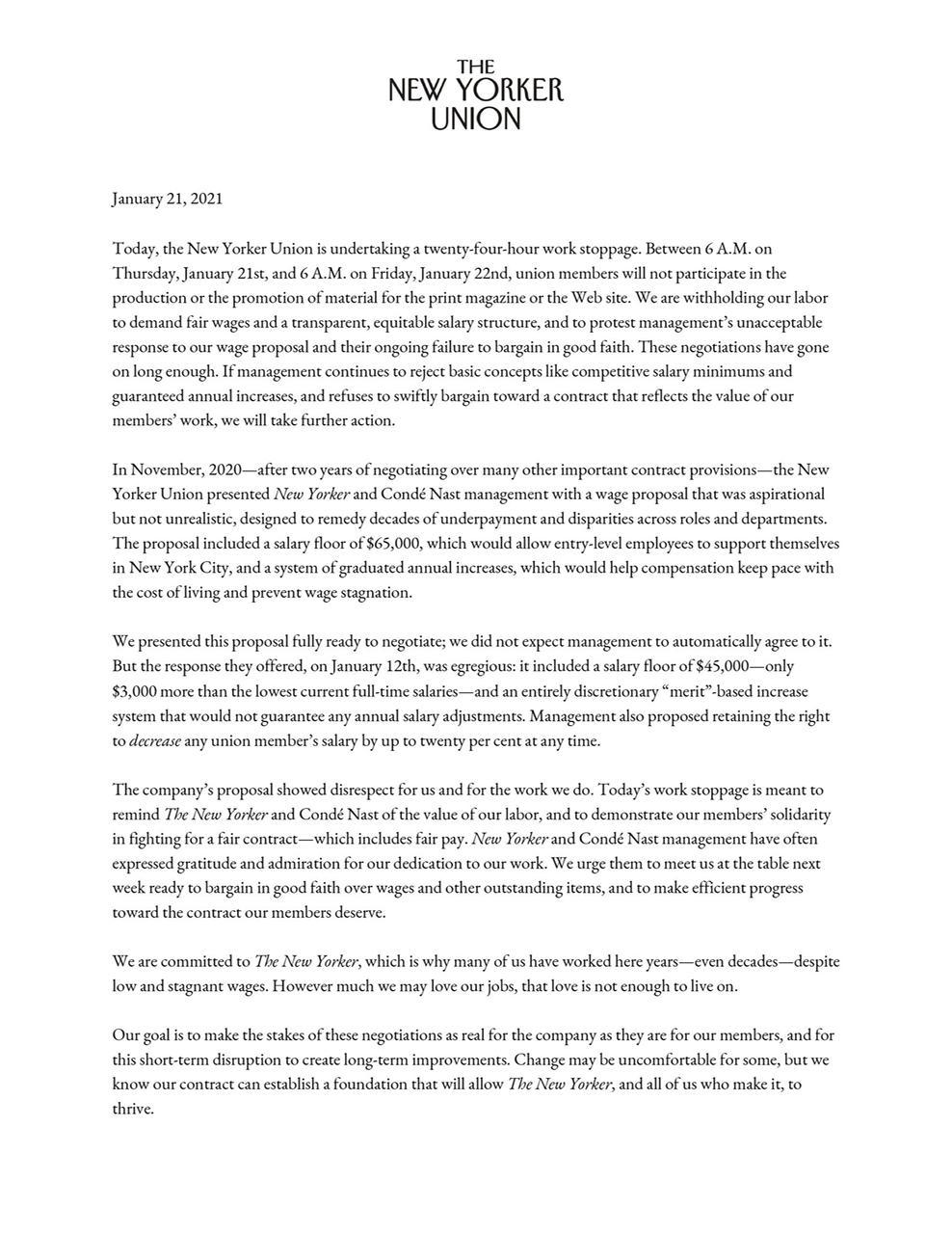 The statement says that in November 2020 — after two years of negotiations over many other important contract provisions — they had presented The New Yorker and its parent company Condé Nast with a wage proposal designed to remedy decades of underpayment and disparities across roles and departments. It included a salary floor of $65,000, which would allow entry-level employees to support themselves in New York City, and a system of graduated annual increases, which would help compensation keep pace with the rising cost of living and prevent wage stagnation.

The union expressed concerns about the stagnant salary scale that proved to be insufficient to survive in a highly competitive and costly city like New York.

The union stated that the administration's response to their pleas was “egregious” and showed “disrespect” for the union and for the work they do, the union noted. “It included a salary floor of $45,000 — only $3,000 more than the lowest current full-time salaries — and an entirely discretionary merit-based increase system that would not guarantee any annual salary adjustments,” they said, adding that the management also proposed retaining the right to slash any union member’s salary by up to 20% at any time.

The union also published a report on Thursday which alleged a significant “pay gap” between male and female workers, particularly for women of color, who earn on average about $7,000 less than their male counterparts. The report also claimed that wage stagnation and lack of opportunity have affected many employees at the magazine. The median salary for unionised employees was $64,000, per annum.

The union also alleged that “Condé management refuses to seek collaborative solutions or seemingly address the issue at all” despite the union sharing report about wage disparities.

A spokeswoman for Condé Nast said: “We’ve had just two bargaining sessions related to economics: the union delivered a wage proposal at the end of 2020 and, in our first bargaining session of 2021, the company delivered a counter-proposal. These were, on both sides, initial offers. It is our hope that, as opposed to resorting to actions like this one, the union will bargain in good faith and return a counter proposal, as is standard in negotiations. That way, we can work together productively to reach a final contract as quickly as possible.”

She added that the company disputes certain conclusions of the pay study, “and we are determined to get to an equitable agreement.”

Susan DeCarava, president of the NewsGuild of New York, said: “The workers who are essential to the production of The New Yorker as an iconic publication deserve better. All of the workers at Condé Nast deserve better….We won the battle for job security with #JustCauseNoExceptions; we’ll fight — and do whatever it takes — to eliminate wage disparity at The New Yorker.”