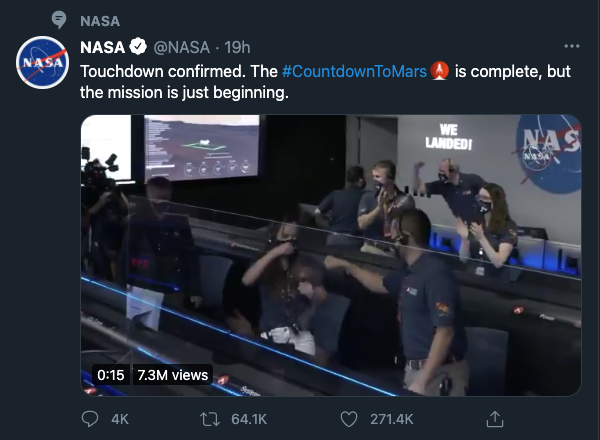 “Touchdown confirmed! Perseverance safely on the surface of Mars, ready to begin seeking signs of past life,” flight controller Swati Mohan announced as the Perseverence made its historic landing at about 3:55 p.m. Eastern Time (ET), prompting her colleagues in NASA's Jet propulsion laboratory to break into celebrations. The Perseverance has travelled 292 million miles (470 million kilometres) since launching on July 30 from Cape Canaveral, Florida.

The US National Aeronautics and Space Administration (NASA) successfully landed the world's largest and most sophisticated rover on the surface of Mars. According to a NASA statement, the spacecraft named Perseverance touched down in an ancient river delta that may contain signs of ancient microbial life.

One key task for Perseverance will be collecting rock and other geologic materials for a future NASA collection mission -- possibly in the early 2030s -- to return those materials to Earth for study. In October, a NASA probe on its return flight from Mars had managed to collect samples from an asteroid, Bennu, floating more than 200 million miles away from Earth.

Mars landings have been described by experts as supposedly the toughest in space exploration, and Perseverance’s arrival at the Jezero Crater, in particular, is being hailed as the trickiest NASA has ever attempted. Strewn with boulders and featuring sand dunes and cliffs as high as 300 feet (about 90 meters), the 28-mile-wide crater had been rejected for previous missions. NASA targeted it after advances in terrain-navigation technology enabled the craft to alter its flight path autonomously.

Indian-American scientist Swati Mohan spearheaded the attitude control and landing system of the Perseverance and was the lead navigator of a particularly difficult touchdown. She has been a part of the mission since it began and has worked on the spacecraft's control and landing department for seven years. She is also a part of NASA's team on the Cassini Mission to Saturn.

“When we put our arms together and our hands together and our brains together, we can succeed,” said Rob Manning, chief engineer at the Jet Propulsion Laboratory. NASA's Perseverance, now becomes the third NASA mission exploring Mars, with Curiosity rover arrived in mid-2012, and the stationary InSight lander began exploring the planet’s geology in November 2018.

Perseverance carries along with it a drone helicopter known as Ingenuity with 4-foot rotors, which will be the first craft to attempt to fly on another planet. The successful landing means the aircraft could fly as soon as next month, depending on how scientists assess different locations for a flight, the spacecraft is built on a budget of $2.7 billion.

Perseverance is 10 feet long matching the previous Curiosity rover in dimensions but is heavier by 126 kilograms because of the 50% increase in the payload which sums up to a total weight of 2,260 pounds. The spacecraft is expected to work without any fuel refill or recharge for at least two years.