Goa's 'Power' Battle: A Story of Secrecy, Shoddy Procedures and Lack of Awareness

While the three contentious projects through Goa’s forested areas are pushed ahead claiming to be in ‘national interest’, Claude Alvares, director of the Goa Foundation – an environmental action group – in a recent documentary, puts forward an emotional question, “Is the survival of Goa also not a national interest?”

This comes amid various unanswered questions, shoddy procedures and a lack of transparency from the state government’s side in moving ahead with the three infrastructure projects – a highway expansion, railway double-tracking and a power transmission line. 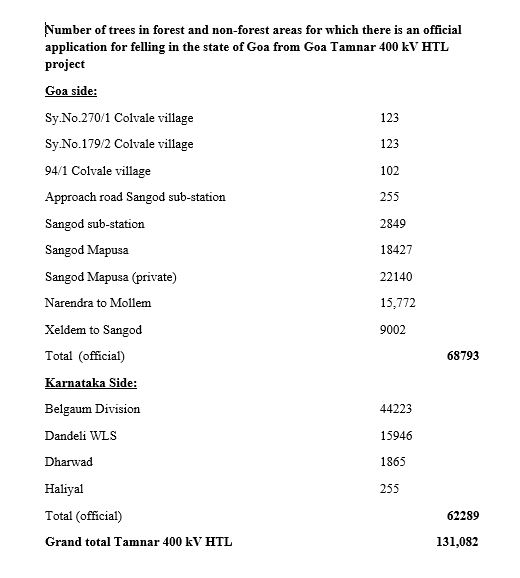 Image: Estimated number of trees felled for the GTTPL project

For the transmission line project, 2,670 trees have already been felled in the Sangod area of Mollem panchayat. and it has been reported that the project proponent, Goa Tamnar Transmission Project Limited (GTTPL) – a special purpose vehicle of Sterlite Power – carried out the task illicitly.

Now, the Goa Foundation has filed a complaint before the regional office of the Ministry of Environment, Forest and Climate Change (MoEF&CC), Bengaluru, against officials of the state forest department. In its complaint letter, it stated that ‘an elaborate plan was hatched’ so as to avoid approaching the MoEF&CC for a forest diversion under the Forest Conservation Act (FCA), 1980.

The area where the trees have been felled for the sub-station (SyNo 21/1) was thickly forested, and the adjacent survey numbers also bear the same type of vegetation. While stage I approval under the FCA was obtained for an approach road to Sy No 21/1, which listed 255 trees, no permission was obtained under FCA for the 2,670 trees felled, the complaint stated.

“If for such a small area (approach road), permission under FCA has been obtained, we are unable to understand why the forest department did not insist that an application be made for SyNo 21/1 when it hosted 2670 forest trees and measured 10.3 ha. The species of the trees in the area for the approach road are similar to the trees found on SyNo 21/1,” the letter stated.

“They (GTTPL) wouldn’t have been able to cut it if the forest department had been honest,” Claude Alvares said, adding, “They begin the project with this type of deviousness, dishonestly and manipulation of the law.”

Besides protected areas of the forests, the GTTPL project will also affect residential areas, fields and human settlements. As per its website, the project, besides the sub-station and LILO Narendra line, also has another component that involves the laying of power lines within the state.

According to a study, the line will pass through 30 villages in the state, crossing over nine rivers and also in close proximity to some archaeological sites, including the famous Tamdi Surla temple. Other concerns have also been raised, as many of the spots through which the line is expected to pass are birding hotspots and sites of small-scale eco-tourism activities.

“There is a strong demand and desire from the local population to shift towards eco-tourism and new economies.​ These are in line with global trends wherein the demand for tourism is around nature or local culture. This is also the strategy promoted by the local tourism department to curb social problems that have arisen from neglectful mass tourism. Clearly, this HVPTL appears to contradict another department’s agenda,” the study noted. 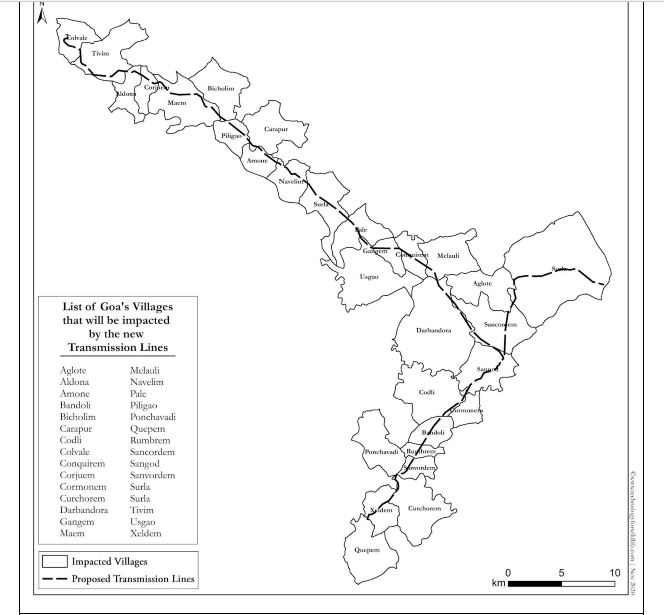 Image: Map of 30 villages through which the LILO Narendra Line will pass

Furthermore, there also appears to be a large information gap on the ground. Newshound India Foundation spoke to a few locals from the villages the line is expected to pass through, and the majority claimed to be unaware of this plan. The ‘Save Mollem’ citizens campaign, meanwhile, has released data of the non-forested areas to be affected by the GTTPL project.

Data on the total number of trees to be felled to facilitate this project is also still not clear. While the project proponent reiterates that the damage will be minimum, apprehensions remain that the total trees that may be axed could be alarmingly high.

While growing scientific consensus exists that power transmission line projects have harmful effects on wildlife and the surrounding landscape in general, linear projects like this also act as a barrier to the free movement of animals through protected areas. The project proponent, GTTPL, however, has claimed that ‘transmission lines co-exist with nature’ and has also rolled out an extensive PR campaign in the state. The CM, too, released an ‘informative video’ last December in favour of the private project.