GoM Report on Government Communication: Beginning of the End of Independent Journalism in India

“Present students are the future journalists. As a part of long-term strategy, the engagement with schools of journalism should be increased.” If the contents of the GoM (group of ministers) Report on Government Communication are to be believed, we might very well be looking at the beginning of the end of independent journalism in India, in the ‘long term’. 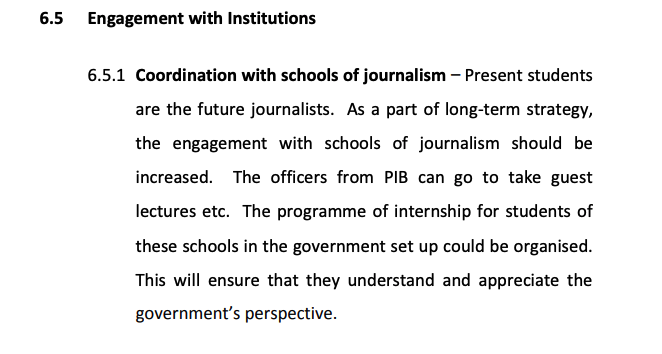 Excerpts from the GoM Report accessed by The Caravan, and later shared by mainstream media organisations across the board, make clear the government's strategy to engage with students and schools of journalism in order to “ensure that they understand and appreciate the government’s perspective.”

The government has unwittingly been able to identify the glaring void that has been created by the ignorance of those sitting in the upper echelons of the media industry and posturing themselves as the pallbearers of the fourth estate. These media persons have, for decades, been unable to set up a much-needed support system to ensure that the future of journalism remains unscathed from the actions of those in power. More than anything else, it is because of the absence of this support system that we find ourselves in a situation where tomorrow’s gatekeepers of democracy are likely to be bribed and corrupted by those in power today, even before they graduate school/college.

Most students are free from financial burdens and other constraints only as long as they are students - a fact that they are well aware of. Once they graduate, like most other practising journalists, they are weighed down by the same constraints. Acknowledging this fact, aspiring journalists are constantly in search of opportunities, unaware of their toxic impact on the masses. They become foot soldiers of the very system they are meant to keep in check. Ironically, students even end up paying for many of these opportunities. Lack of internships, no access to practicing journalists, and absence of networking opportunities with fellow students and educational institutions, particularly for students and institutions from smaller cities, are a few factors responsible for the uncertainty that looms over the future of Indian journalism.

Disturbingly, the failure to provide recognition or promote student journalism, and the inability to establish a system to hold students accountable from the day they join any institution, also speaks volumes about the misplaced priorities of bodies like the Editors Guild of India and the Press Trust of India. The situation does not appear to be any better when it comes to educational institutions. Almost all of the 'top institutions’ guaranteeing placements have, for long, been factories feeding freshers to ‘friendly’ legacy media outlets at throwaway prices. To make matters worse, the criteria for hiring professors seem to pivot around their degrees rather than their scope of work as professional journalists.

In an ever-reducing media constantly quarrelling within itself, where even internship opportunities are extended through references, the revelations made in the report clearly indicate that the government has finally discovered journalism’s Achilles’ heel which, if exploited, will most likely be the end of independent journalism as we know it. Coupled with the ongoing crackdown on independent media which is clearly stunting its expansion, government collaborations are likely to be used as means to condition impressionable students and convert them into ‘friendly’ journalists who will start toeing the line of the administration, even before graduating.

What will happen if the government decides to spend a fraction of their advertisement revenue to have students weave narratives? Will the youth of India not be corrupted? Will the future of our great democracy possibly be secure?

What needs to be done

We need to begin by setting up a pan-India support system for students of journalism and mass communication, by working in tandem with educational institutions across the country, under a self-regulatory body comprising independent journalists and stalwarts from various fields - a system that nurtures them to garner the necessary skills needed to survive independently after they graduate. Granting access, connecting with meritorious students from smaller cities and institutions, and invoking in them a deep sense of accountability is perhaps the only shot we might have at even thinking of an independent media in the long run.

Our community’s inactions yesterday have resulted in today’s perilous state of journalism. If we foolishly tread the same path, we are most certainly looking at the beginning of the annihilation of tomorrow’s journalism. It is high time for media professionals from all quarters to come together and do all that it takes to guide students, in a bid to secure the future of independent journalism in India. We cannot afford to have the future of journalism caught between the clutches of any ruling dispensation, or those blindly toeing its narrative.

The future needs to be secured. Change must begin now.

Mask Up India: The Lancet Study Shows that Virus is Airborne, Double Masking, N95 and KN95 Masks Recommended for Public