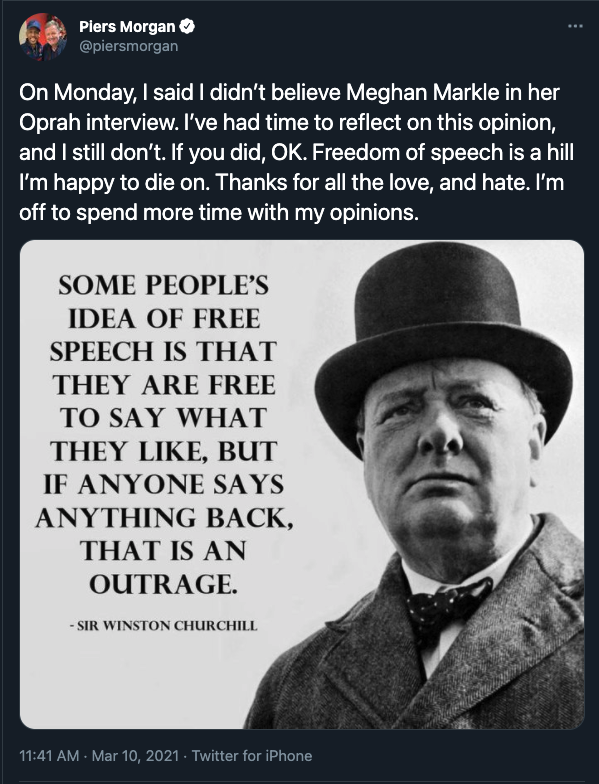 In a shocking incident, British channel ITV's Good Morning Britain's co-host Piers Morgan quit the show on air after he made critical remarks about the mental health of actor Megan Markle, who is married to Prince Harry of the British royal family. prompting sharp comments from co-presenter Alex Beresford.

Later on, British TV regulatory body Ofcom began an investigation telling the press that they had received over 41,000 complaints.

Meghan Markle, in a tell-all interview with American media personality Oprah Winfrey which was aired on Sunday, opened up about her suicidal thoughts during her pregnancy. Apparently, when Markle suggested that she get therapy for these thoughts, a senior member of the royal family had told her that “it would not look good”.

Morgan had questioned her statements on his show. “Who did you go to?” he had said. “What did they say to you? I’m sorry, I don’t believe a word she said, Meghan Markle. I wouldn’t believe it if she read me a weather report.”

Cutting him off, Beresford had said, “I understand you’ve got a personal relationship with Meghan Markle, or had one, and she cut you off. She’s entitled to cut you off if she wants to. Has she said anything about you since she cut you off? I don’t think she has but yet you continue to trash her.” At this point, Morgan got up and stormed out of the studio, saying: “OK, I’m done with this, sorry, no, can’t do this.”

In a statement, the broadcaster said: “Following discussions with ITV, Piers Morgan has decided now is the time to leave Good Morning Britain. ITV has accepted this decision and has nothing further to add.”

In the first show after Morgan's departure, co-host  Susanne Ried told viewers they “disagreed on many things”, including his remarks on the Duchess of Sussex, and described him as an “outspoken, challenging, opinionated, disruptive broadcaster”.

Earlier today he also tweeted about Good Morning Britain beating BBC breakfast in rating for the first time, and said:, “My work is done.”

Speaking outside his home, he told Sky News that his departure had been “amicable” and said: “I had a good chat with ITV and we agreed to disagree.” He said he would enter a “temporary hibernation” and was “always in talks with people.”

He also said, “When we talked about this yesterday, I said as an all-encompassing thing I don’t believe what Meghan Markle is saying generally in this interview, and I still have serious concerns about the veracity of a lot of what she said. But let me just state on the record my position about mental illness and on suicide. These are clearly extremely serious things that should be taken extremely seriously, and if someone is feeling that way they should get the treatment and help they need every time.”

Piers Morgan has been one of the harshest critics of the Boris Johnson administration’s handling of the coronavirus pandemic. He has interviewed multiple ministers and government officials over the past year and many of them have accused him of being brusque on camera. He also has a history of attacking women celebrities as was the case, last year, when he had implied on-air that British media personality and activist Jameela Jamil had driven a friend of hers to suicide. 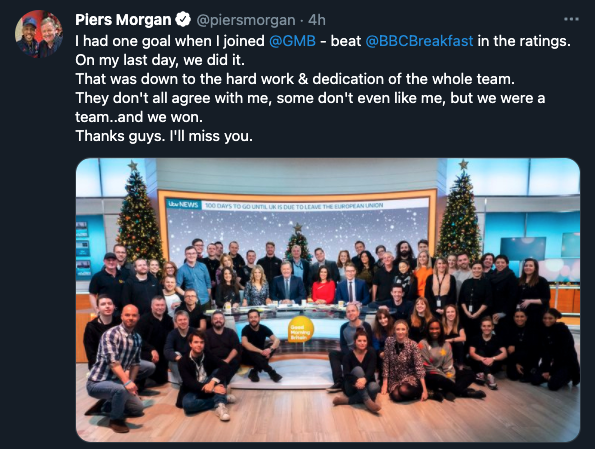