#StayStrongIndia: Countries Across the Globe Pledge their Support to India's Fight Against the Virus

As India faces a deadly second wave of COVID-19 infections and deaths, unavailability of beds and shortage of oxygen and vaccines, countries across the world have pledged to provide essential support and help India get through the crisis.

The second wave hit India in early April. The country’s healthcare system has been completely gutted and is failing to keep up with the surge in new infections combined with the shortage of beds, oxygen and essential drugs. Where the state falls short, social media is playing a big role in helping people find hospitals, medicines and even oxygen cylinders for treatment.

The Union government's lack of preparedness and dysfunctional relations with opposition ruled states have made international headlines at this point and other countries have come forward to help India get through this phase. Australia, China, Germany, Pakistan, Saudi Arabia, Singapore, the United States, the UAE and the United Kingdom have all pledged to provide necessary help for India's efforts to overcome COVID-19.

Singapore was among the first to quickly respond to India’s request for cryogenic oxygen tanks. On April 24, the Indian Air Force picked up 4 such units donated by the Singapore government. 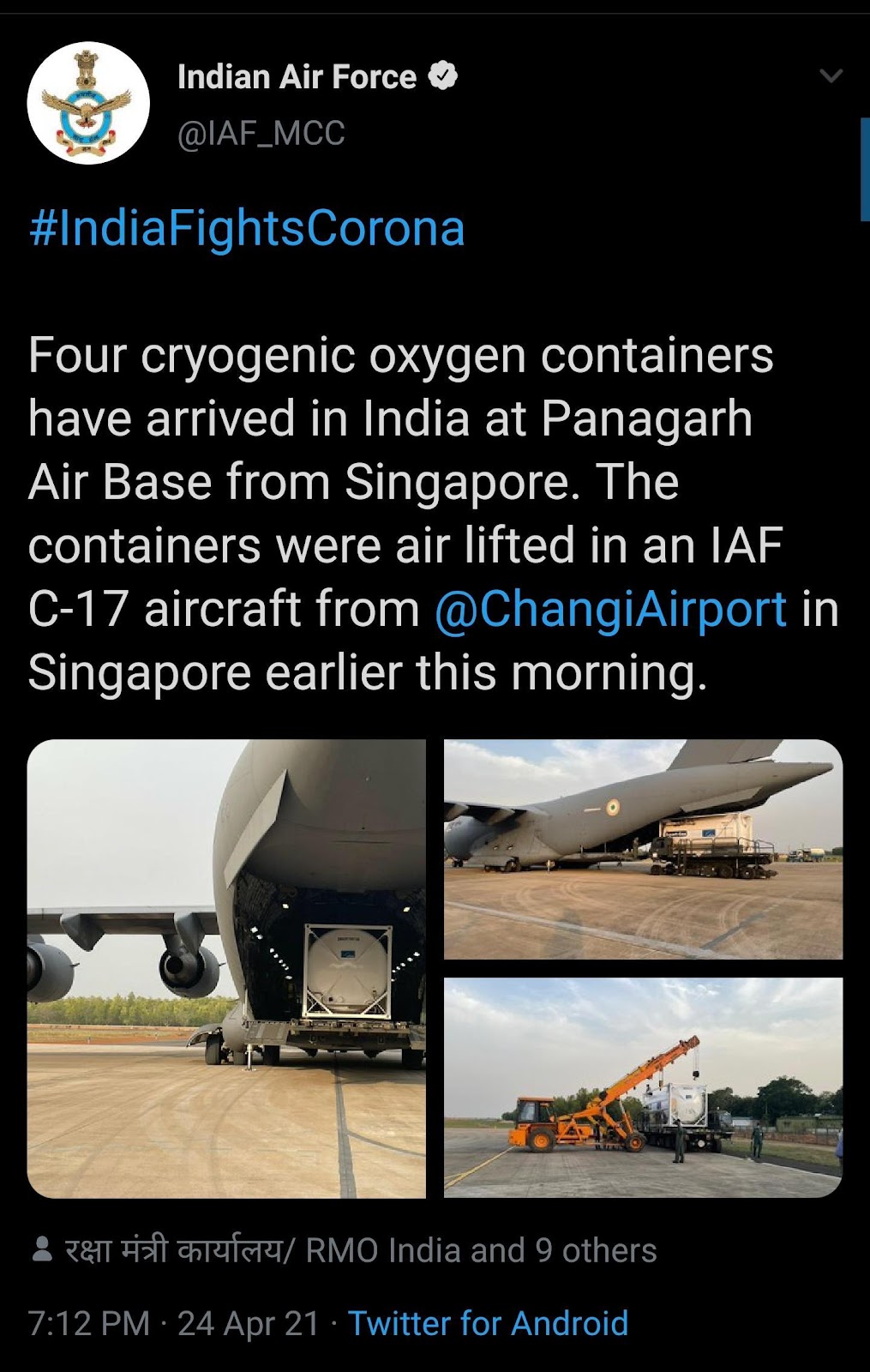 Australian Prime Minister Scott Morrison said that his administration is currently working with India’s to determine how it can assist. The two countries together with the US and Japan, are in a bloc called the “Quad”. One of the coalition’s foremost pledges to supply a billion doses of COVID-19 vaccines across Asia. 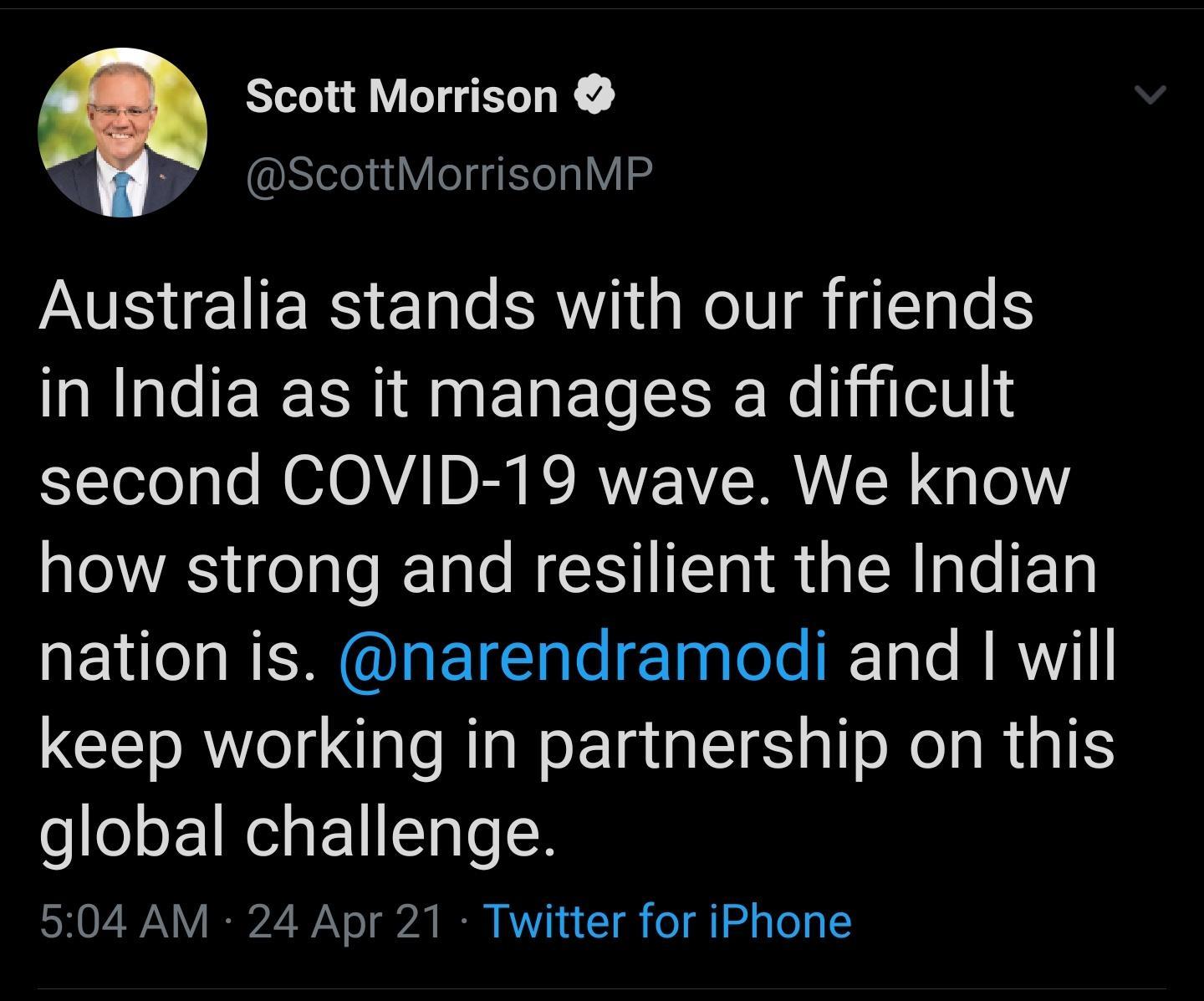 China Foreign Ministry spokesperson  Zhao Lijian says that Beijing is “ready to provide support and help according to India’s need.” Suspending ongoing disputes in the Himalayas and the Indian Ocean, they are currently in talks with Indian health officials. 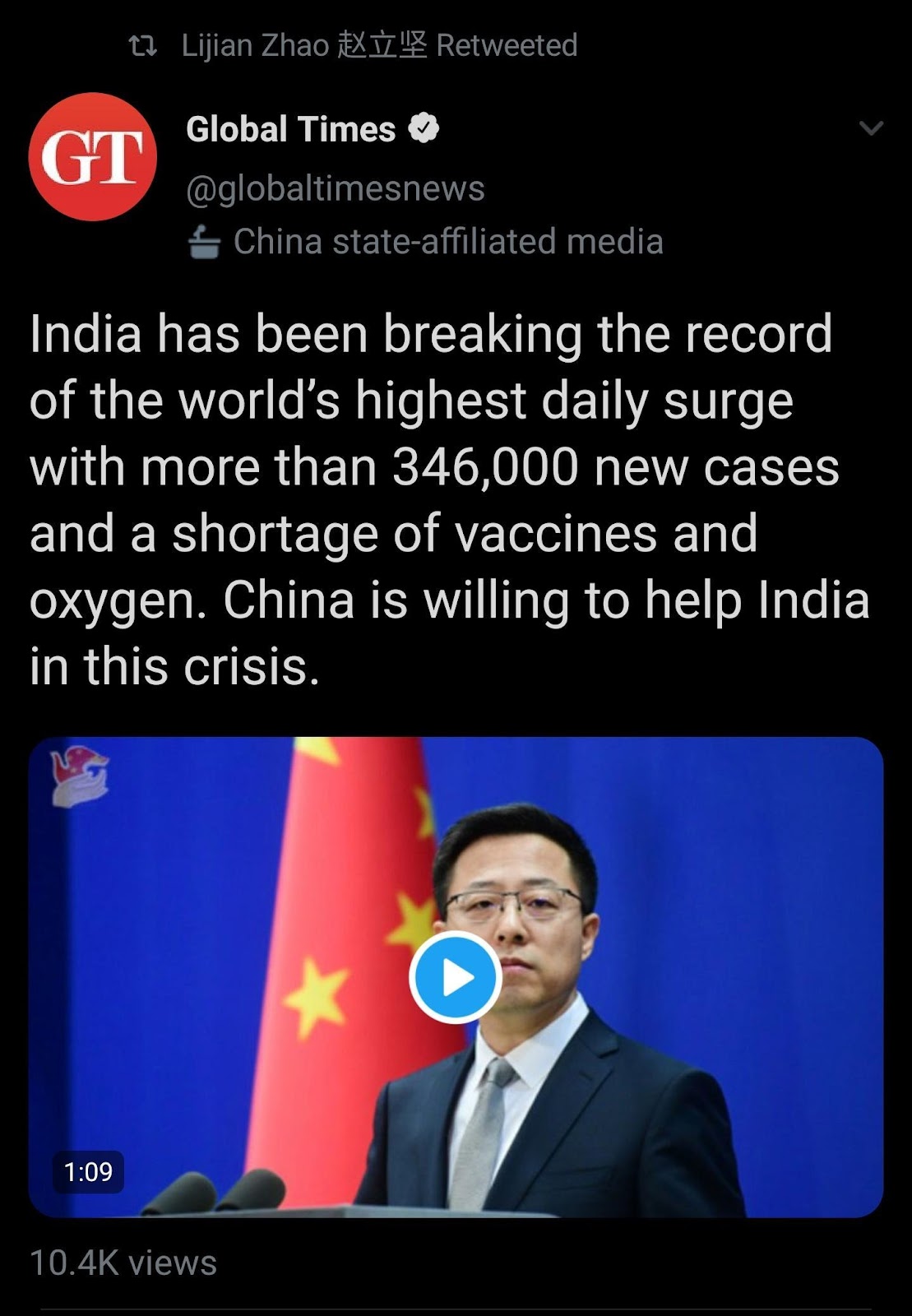 German Chancellor Angela Merkel expressed her solidarity to India with her administration mobilising 23 mobile oxygen generation plants to Indian shores. They are expected to arrive later this week. 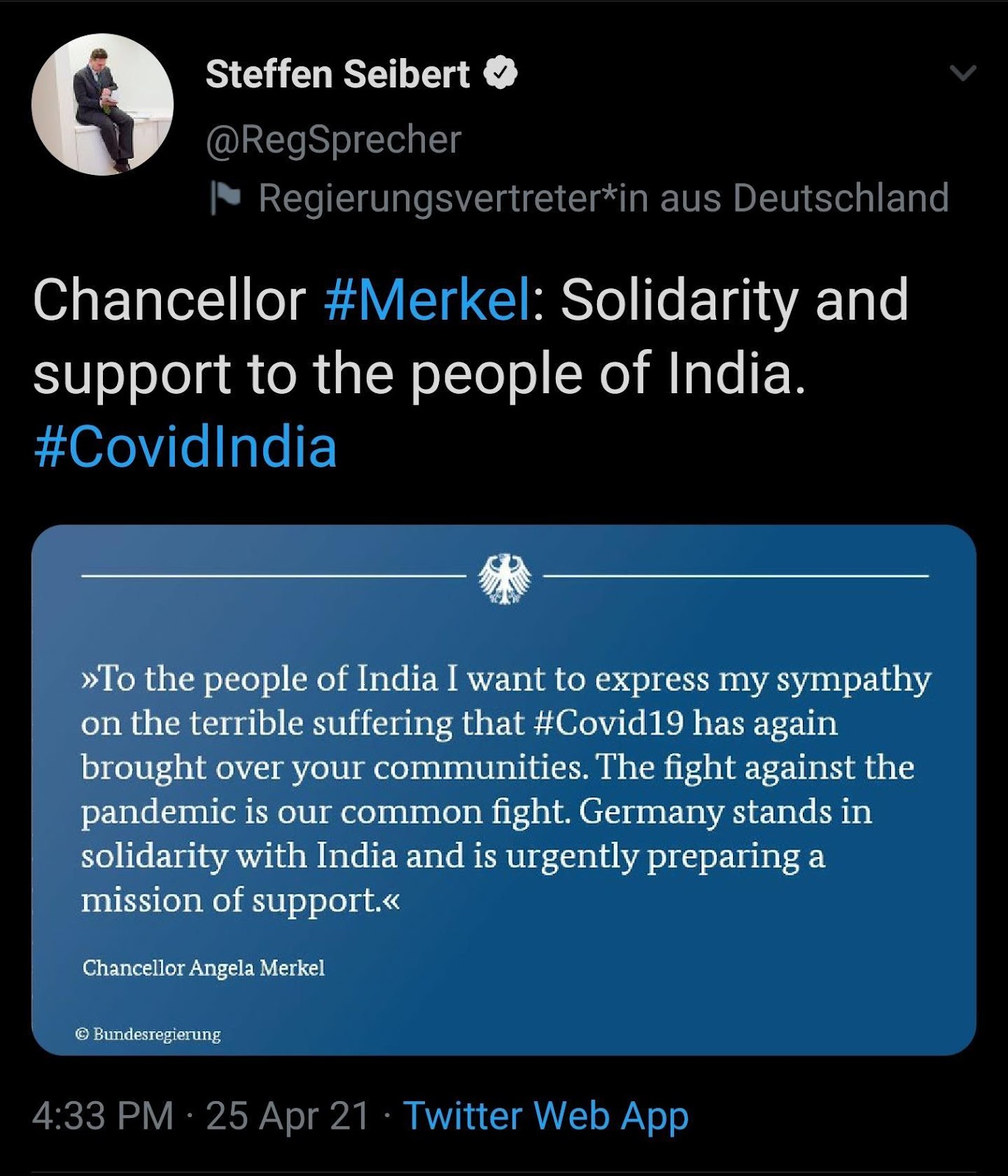 Pakistan has also come forward to support Indian efforts keeping aside decades of rivalries. Influential social welfare organization Edhi Foundation is ready to send a fleet of 50 ambulances manned by Pakistani health professionals to help in India’s pandemic response. They are awaiting clearance from the Modi government. 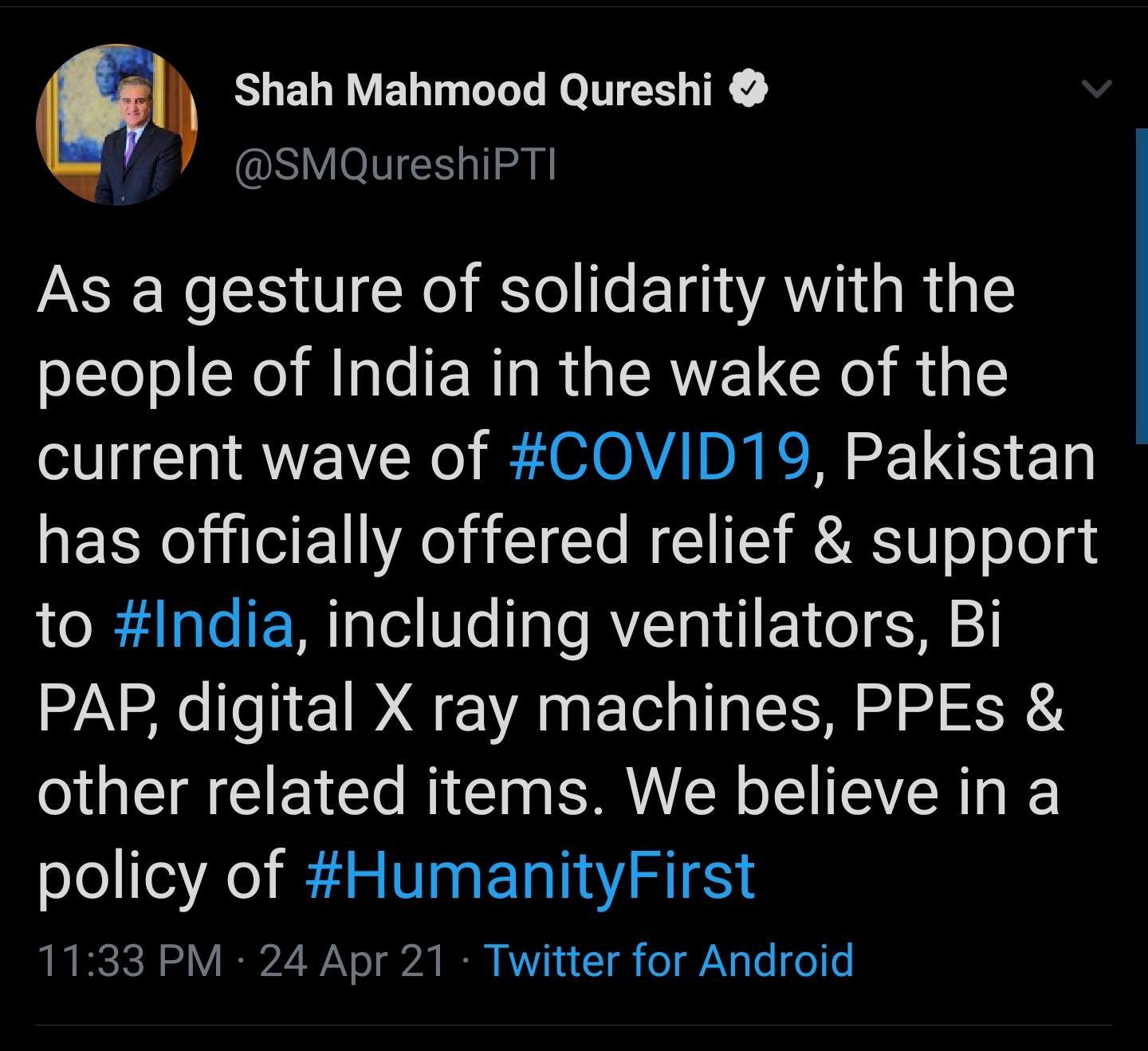 The UK rushed 140 ventilators and 495 oxygen generators to Delhi, according to The Guardian. Prime Minister Boris Johnson said that he’s “determined to make sure that the UK does everything it can to support the international community in the global fight against the pandemic.” 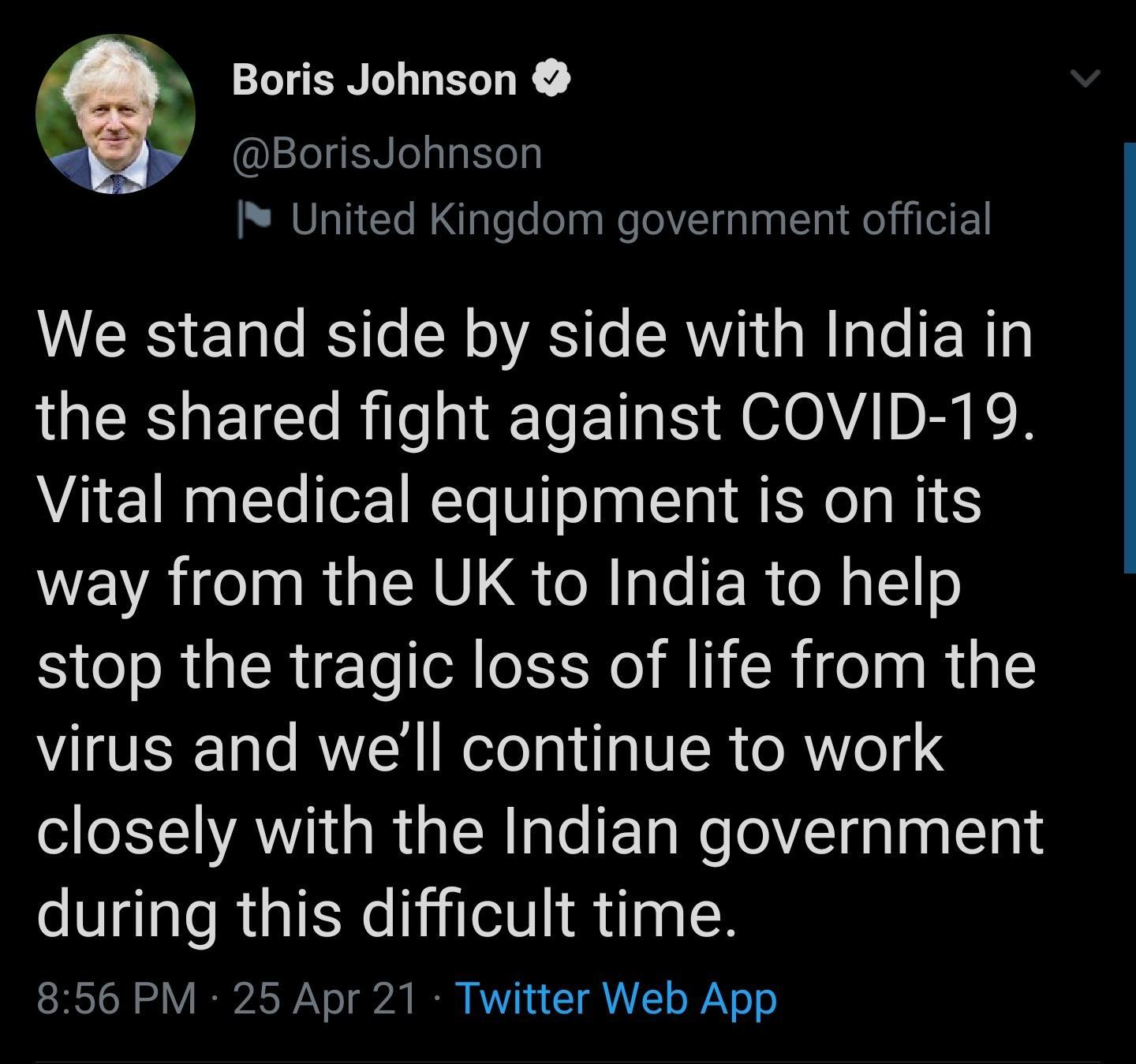 The Saudi Arabian royalty has sent 80 metric tonnes of liquid oxygen. They are being transported with the help of the Adani and Linde groups. 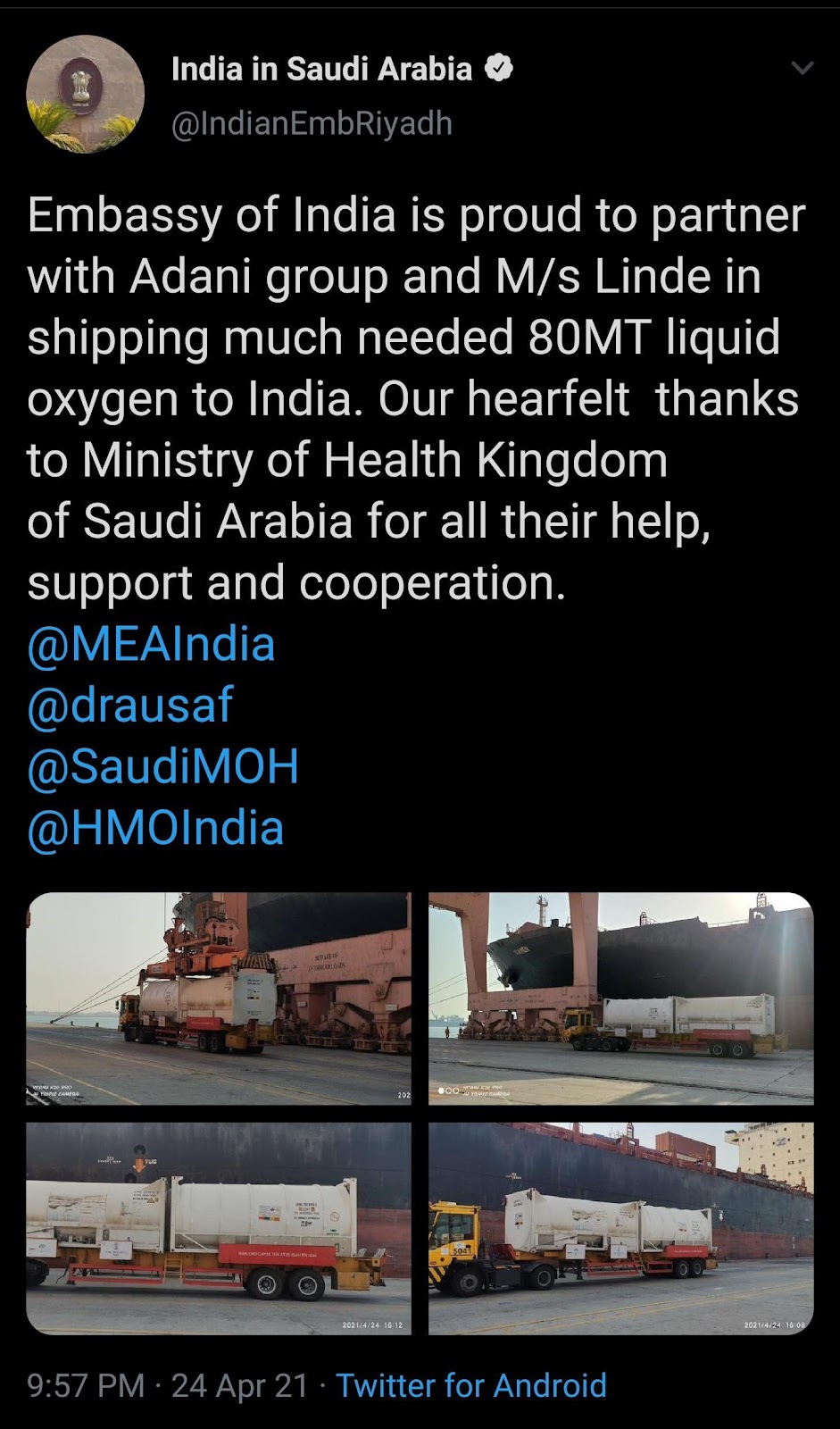 Appearing on ABC News this morning, Anthony Fauci, director of the US National Institute of Allergy and Infectious Diseases, says the US is “mulling over sending oxygen supplies, COVID-19 test kits, drug treatments, and personal protective equipment.”

US President Joe Biden also promised to help India in the fight against COVID-19 with their first move being an end to a ban on raw materials of vaccine production. 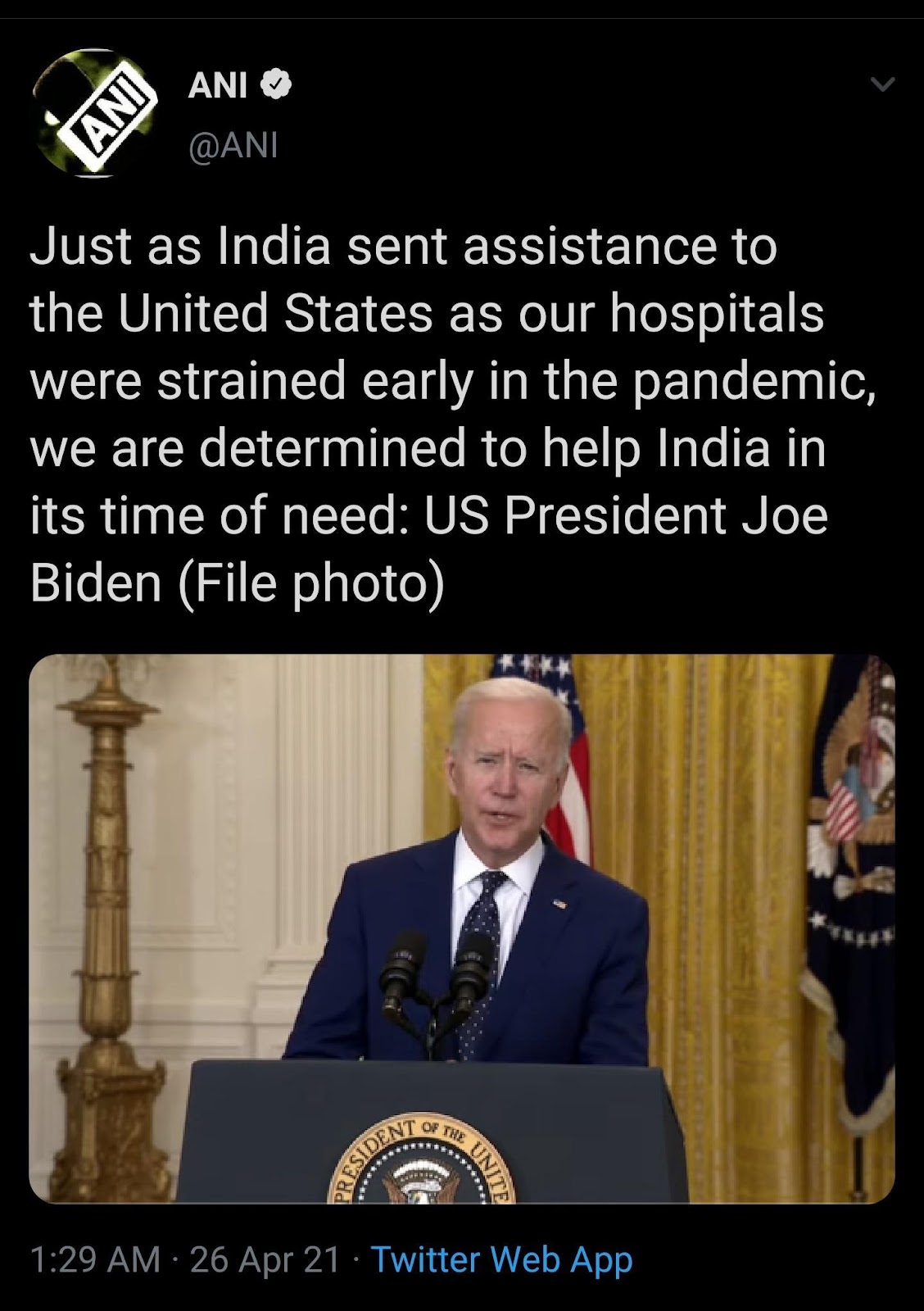 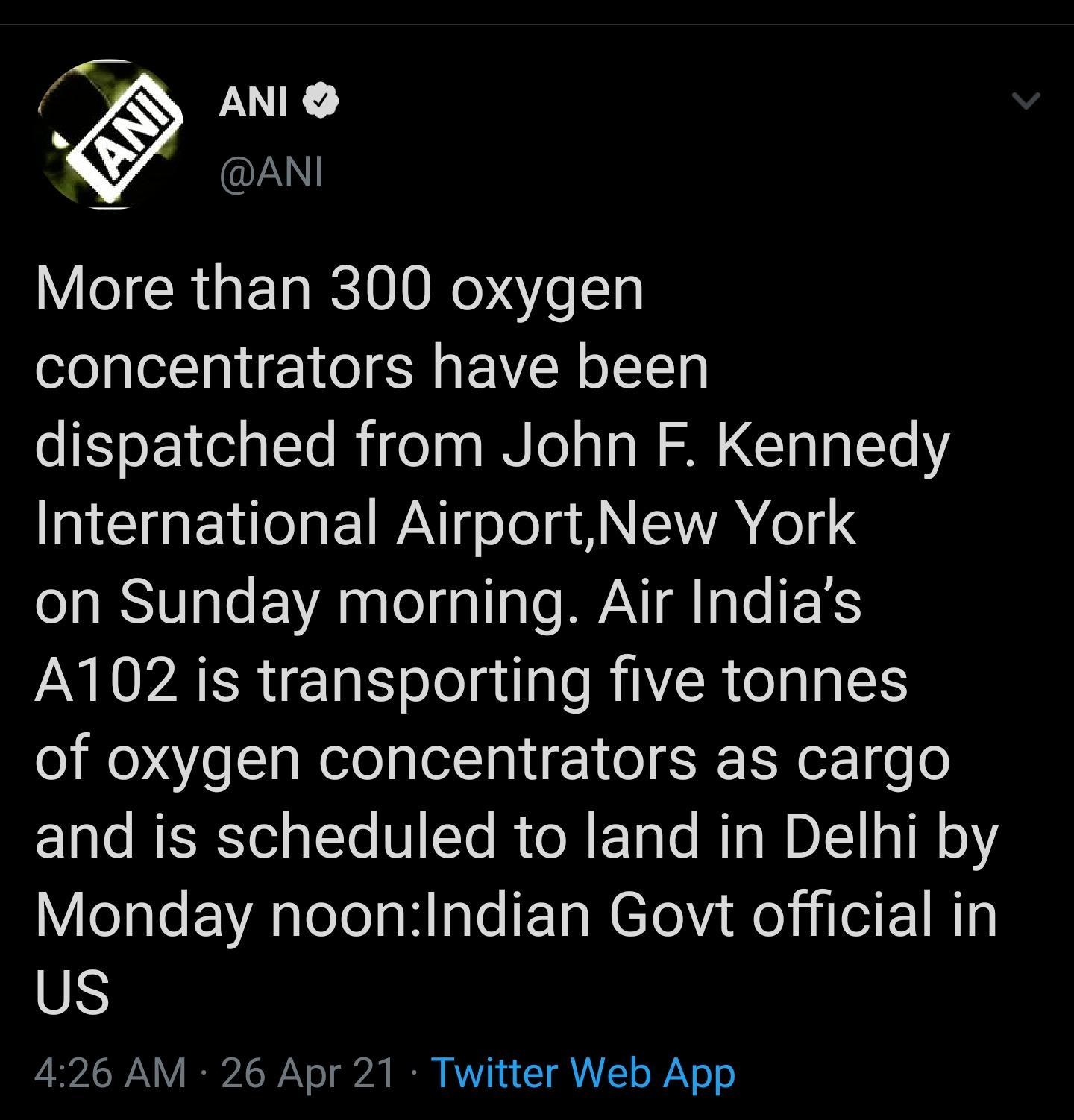 Over the past week, India has been reporting a record number of infections every day with Maharashtra, Karnataka, Uttar Pradesh, Kerala and Delhi being the worst hit with a shortage in hospital beds, oxygen and vaccines. A total of 3,52,991 new infections and 2,812 deaths were reported on Monday.