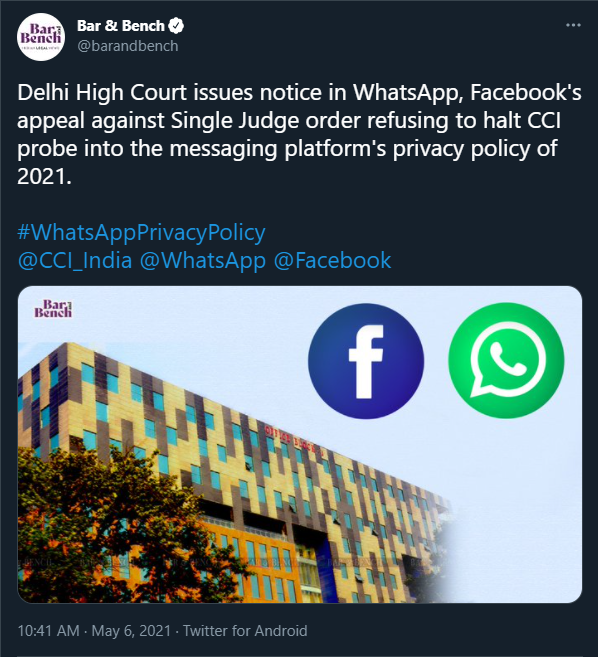 A bench of Chief Justice DN Patel and Justice Jasmeet Singh issued the notice to the CCI which had ordered the probe and sought its response by May 21, the next date of hearing.

According to a Live Law report of the April 22 hearing, WhatsApp argued before the single judge that the CCI had “jumped the gun” by starting suo motu proceedings concerning WhatsApp's privacy policy of 2021 when the issue was pending before two constitutional courts-the Supreme Court and the Delhi High Court.

The court had agreed to a point. It stated that although it might have been “prudent” for the CCI to await the result of petitions within the Supreme Court docket and the Delhi High Court towards WhatsApp's new privateness coverage, however not doing so wouldn't make the regulator's order “perverse” or “wanting of jurisdiction.”

Meanwhile, the CCI had argued before the court that the new privacy policy of WhatsApp would lead to “excessive data collection and stalking of consumers for targeted advertising” aimed at bringing in even more users and is, therefore, “alleged abuse of a dominant position.”

“There is no question of Jurisdictional error,” the CCI’s representative had contended saying that WhatsApp and Facebook's pleas challenging its decision were “incompetent and misconceived.”

However, the single judge bench refused to interfere with the CCI order merely on the ground that the antitrust authority should await the outcome of the pending cases before the Supreme Court and the High Court.

After Assam, Preparations for 'Two-Child Policy' in Uttar Pradesh