US Restores Health Care Plans for Members of LGBTQ+ Communities 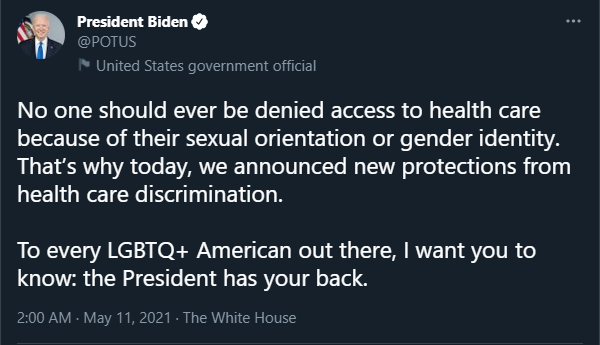 The US federal government will protect gay and transgender people against sex discrimination in healthcare, the Biden administration declared on Monday, reversing a Trump-era policy that narrowed rights at the intersection of changing social mores and sensitive medical decisions, The Associated Press reported.

Secretary Xavier Becerra of the Department of Health and Human Services said that the department has taken action to affirm federal laws forbidding sex and gender discrimination in healthcare.

“Everyone—including LGBTQ people—should be able to access health care, free from discrimination,” Secretary Becerra stated on Monday, “The Supreme Court has made it clear that people have a right to not be discriminated against on the basis of sex and receive equal treatment under the law, no matter their gender identity or sexual orientation. That's why today HHS announced it will act on related reports of discrimination,” Becerra was quoted by Reuters.

In 2019, Trump officials in the HHS’s Office for Civil Rights proposed a rewrite of the definition in such a way that omitted protections based on gender in federally funded programs run by the department. The altered federal rule became final last June, reports The Washington Post.

This policy rolled back healthcare standards for people belonging to the LGBTQ+ community, which had previously prohibited discrimination against transgender and gender non-conforming people. That rollback, which came during Pride Month and on the four-year anniversary of the deadly Pulse nightclub shooting, infuriated LGBTQ advocates, some of whom took the administration to court, resulting in federal judges temporarily blocking the plans to scrap the protections, CNN reports.

Despite the progressive actions from the new administration, a recent analysis from advocacy group The Human Rights Campaign found a massive wave of anti-transgender bills being signed into law in Republican-led states, making 2021 a record-breaking year for anti-LGBTQ legislation, reported Forbes.

The Human Rights Campaign reports that 115 anti-Trans bills have been proposed in at least 30 states, many of them targeting young people. At least 66 transgender youth sports bans have been introduced, along with 35 bills that would affect medical care for Transgender youth.