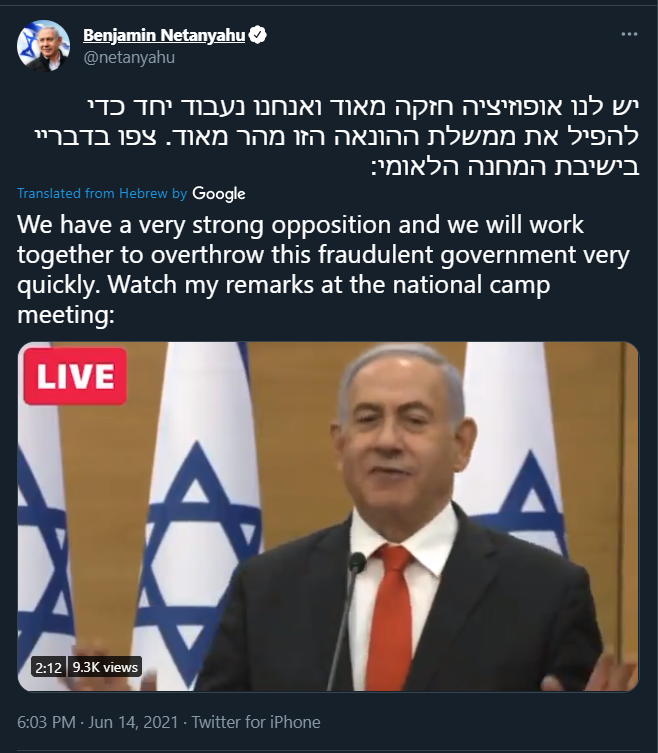 The elections came at a time of heightened tensions in the Israel-Palestinian conflict, which has grown more bitter in the Netanyahu years, in part due to the expansion of settlements considered illegal under international law in the occupied West Bank, Times of India reports.

Netanyahu, who is currently on trial for corruption charges, which he labelled as a left-wing “conspiracy”, has been serving as the Prime Minister of Israel since 2009. He also previously served a three-year term between 1996 and 1999. Beloved as “King Bibi” by his right-wing supporters and condemned as the “crime minister” by his critics, Netanyahu has been a controversial figure in Israeli politics.

The record-breaking prime minister has utilized a formidable array of skills to retain power legitimately for 4,457 days since 2009. And now his opponents have mustered theirs to legitimately consign him to the opposition benches, Times of Israel reports. Netanyahu and his loyalists have branded his ouster as illegitimate. “If, God forbid, this government is formed, we’ll bring it down very quickly,” Netanyahu had stated a week before the elections.

Naftali Bennett, a right-wing Jewish nationalist and former tech millionaire were to take over at the helm of the eight-party bloc, united only by their shared disdain for the hawkish right-wing leader, NDTV reports.

Netanyahu, 71, in typically combative style, vowed shortly before his defeat that “if it's our destiny to be in the opposition, we'll do so with our heads high until we take down this bad government and return to lead the country our way,” reports AFP.