NATO Leaders Declare China to be "A Global Security Threat" 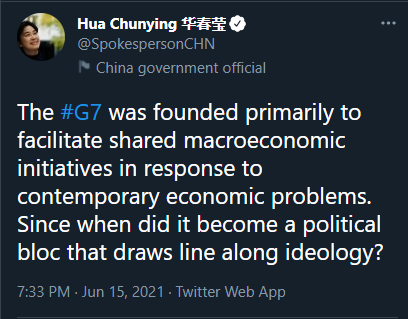 (Click on the image to view the full thread)

In the summit, the new US President urged his fellow NATO leaders to stand up to China's ‘authoritarianism and growing military assertion’. Biden, who arrived at the summit after three days of consulting with the Group of Seven allies in England, pushed for the G-7 communique there that called out what it said were forced labour practices and other human rights violation impacting Uyghur Muslims and other ethnic minorities in the western Xinjiang province, reports The Indian Express. In a summit statement, the leaders said that China’s goals and “assertive behaviour present systematic challenges to the rules-based international order and to areas relevant to alliance security.” 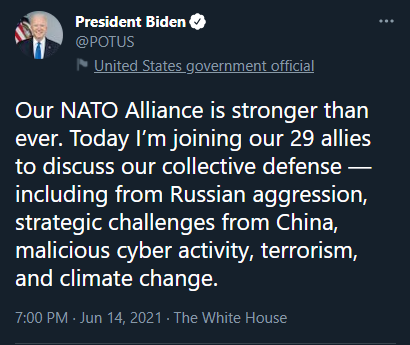 China denounced the joint statement by the G7 leaders that rebuked Beijing as gross interference in the country’s internal affairs. “We will not pose a 'systemic challenge' to anyone, but if anyone wants to pose a ‘systemic challenge’ to us, we will not remain indifferent.”

The Chinese embassy in London said it was dissatisfied and opposed to mentions of Xinjiang, Hong Kong and Taiwan that distorted the facts and exposed the “sinister intentions of a few countries such as the US”, Hindustan Times reported. 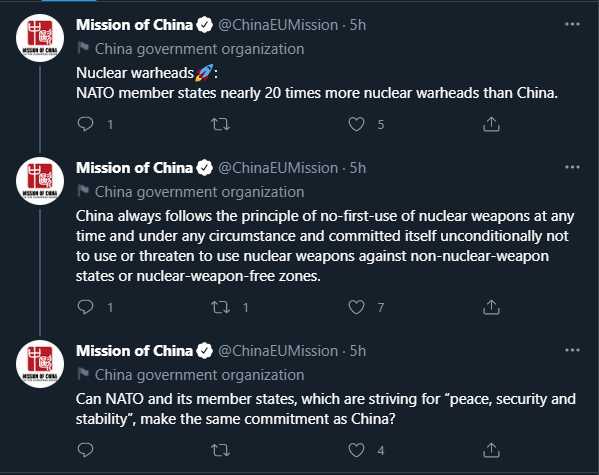 Besides China, Biden also requested his allies to work more closely to counter Russia’s aggressive actions that “constitutes a threat to the Euro-Atlantic”. In his first appearance at a NATO summit since assuming the office, Biden called on Russian President Vladimir Putin to step back from provocative actions targeting the US and its allies, The Associated Press reports.

Biden, who will meet Russian President Vladimir Putin on Wednesday in Geneva, later stated in a news conference that China and Russia were trying to split the transatlantic alliance and that, while he was not seeking conflict with Russia, NATO would respond if Moscow "continued its harmful activities".

The President’s interaction with NATO allies and tough stance on Russia marks a sharp shift in the tone from the past four years and the former president who frequently maligned the alliance. “I want all of Europe to know that the United States is there,” said Biden. “NATO is critically important to us.”